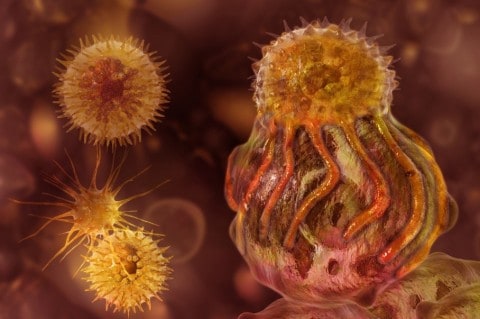 Dr. Anthony Holland, composer, and musician, took an interest in the physical effects of sound. Associate Professor and Director of Music Technology at Skidmore College in New York built a laboratory to test the effects of audio frequencies on microbiology. The first test subjects were harmless microorganisms such as paramecium (single-celled organisms).

When you strike a tuning fork, it vibrates with sound at 440 Hertz. By holding another tuning fork near the one that is struck, you can induce a sympathetic vibration. Shattering crystal is done the same way, by matching the resonant vibration of the crystal until the vibration increases and the glass is shattered.

Much to his surprise, Dr. Holland discovered that a combination of two related sound waves would completely shatter the cells. The underlying principle is the same as when a human voice sings the right note to break a crystal glass:

“When you strike a tuning fork, it vibrates with sound at 440 Hertz. By holding another tuning fork near the one that is struck, you can induce a sympathetic vibration. Shattering crystal is done the same way, by matching the resonant vibration of the crystal until the vibration increases and the glass is shattered.”

Dr. Holland realized that all matter has its own natural frequency. Figuring out what it is and amplifying it will destroy the object. The researcher now turned his attention toward determining the vibrational rate needed to disrupt living cancer cells.

Novobiotronics is a research and development company founded by Dr. Holland. The company “is a nonprofit scientific and educational research company dedicated to laboratory experimentation on the affects of frequency-specific oscillating pulsed electric fields (OPEF) on cancer cells and pathogenic organisms. This technology offers a nontoxic, noninvasive and inexpensive means for ‘shattering’ cancer cells and disabling antibiotic resistance in MRSA, Pseudomonas, and other dangerous pathogens.”

Human trials are not yet underway. Once developed, this new technology could provide a nontoxic, noninvasive, and inexpensive way to combat cancer cells.

In France, French composer and bio-energetic healer Fabien Maman teamed up with former-nun-turned-drummer and biologist Helene Grima to see if music could be used as an energetic healing technique. Among other questions, they wondered how far sound penetrates the body?

A year and a half later, after studying how low volume sound (30-40 decibels) affects human cells, they reached some startling conclusions. The experiments were conducted with a microscope-mounted camera directed at slides of human uterine cancer cells. They recorded the physical changes to the cells when they played different acoustical (non-electric) instruments – guitar, xylophone, gong, and human voice – for 20 minutes.

When the researchers played the Ionian Scale (nine musical notes C-D-E-F-G-A-B- and C and D from the next octave above) on a xylophone for 14 minutes, “The structure quickly disorganized. Fourteen minutes was enough time to explode the cell when I used these nine different frequencies,” according to Maman.

When Maman sang the Ionian Scale to the cells they exploded in less than 9 minutes! This unexpected discovery led the researcher to comment:

“The human voice carries something in its vibration that makes it more powerful than any musical instrument: consciousness.”

Maman then ran experiments with two women who had breast cancer who listened to tones for 3-1/2 hours daily for one month. The tumor disappeared completely from one of the cancer patients. When a surgeon removed the other woman’s tumor, he said it was much smaller and had literally dried up. This patient recovered completely, cancer-free.

Maman kept a photographic record of the experiments to support his incredible findings. Here are images showing cancer cells being killed by the Ionian Scale:

Speaking medically, Maman explained how sound could change and kill cancer cells at the structural level:

“The cancer cells show evidence of cell nuclei incapable of maintaining their structure as the sound wave frequencies attack the cytoplasmic and nuclear membranes.”

As the human voice is amplified (to make it louder) for lengthy durations of time without interruption, the targeted cells are unable to adapt or stabilize themselves. The cells die because they can’t live in “an atmosphere of dissonance and they cannot become resonant with the body. Therefore, the tumor cells destabilize, disorganize, disintegrate, explode and are ultimately destroyed in the presence of pure sound.”

British researchers in Sutton (outside London) at the Royal Marsden Hospital’s Institute of Cancer Research (ICR) are testing high-powered beams of ultrasound to treat cancer.

So far, they have been successful in wiping out metastatic bone lesions without chemotherapy or surgery. The scientists are optimistic that high-intensity focused ultrasound (Hifu) could also be used to trigger the release of custom-designed lipid capsules containing cancer drugs inside a tumor.

Ultrasound waves of a frequency 10,000 times more powerful than those used in pregnancy scans cause cells to heat up and die. One second of 130F heat is all it took to kill tissue cells.

The prospect of a safe, fast, and effective cure for all types of cancer is very encouraging. We can expect to hear more about this exciting new treatment technology soon. In the meantime, keep singing!

0 thoughts on “Can Sound Cure Cancer?”