A Defiant Cuomo Says He Will Not Resign 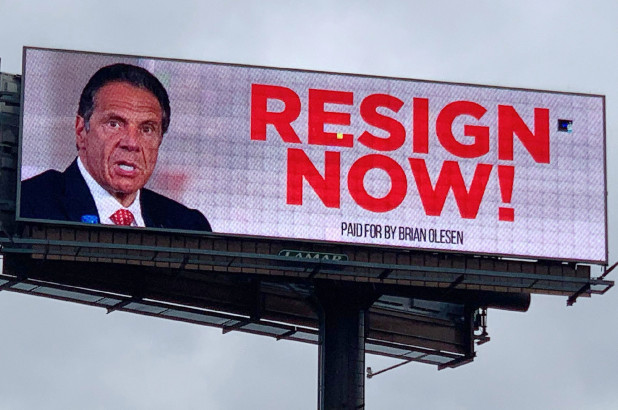 Despite increasing allegations of sexual misconduct, a defiant Governor Cuomo refuses to resign.

The beleaguered Governor has now been accused by multiple women of sexual harassment. He’s also been accused of covering up nursing home deaths in New York at the outset of the pandemic last year. The two scandals have prompted many state lawmakers, even some Democrats, to call for Cuomo’s resignation.

The latest report of sexual misconduct came over the weekend from a woman named Ana Liss. She told the details of an allegedly “toxic” working environment created by the Governor’s office to the Wall Street Journal. Liss, a former aide of Gov. Andrew Cuomo, said he asked her if she had a boyfriend, called her sweetheart, touched her on her lower back at a reception, and once kissed her hand when she rose from her desk. Ms. Liss is the third former female aide to accuse Mr. Cuomo of inappropriate behavior in the workplace.

In the wake of the ongoing scandals, Cuomo now faces calls to resign from state Senate Majority Leader Andrea Stewart-Cousins and state Assembly Speaker Carl Heastie, both Democrats. As of Sunday afternoon, at least 35 Democrats and 12 Republicans in the New York state legislature had called for Cuomo to step down.

Cuomo said on Sunday that “there is no way I resign” while New York Attorney General Letitia James is investigating the allegations against him. He said, “let’s get the findings, and then we’ll go from there. But I’m not going to be distracted by this either.”

Fox News has compared Cuomo’s refusal to resign to Virginia Gov. Ralph Northam, who wouldn’t resign in 2019 despite calls from members of his own party to step down over a scandal of his own.

Northam’s 2019 scandal was over a photo that appeared on his medical school yearbook page showing two men — one dressed in blackface and the other dressed as a member of the Ku Klux Klan.

Northam had faced substantial pressure to resign from Democrats both in Virginia and nationwide.

“There is no place for racism in America,” President Biden, who had not yet announced his presidential campaign, said. “Governor Northam has lost all moral authority and should resign immediately; Justin Fairfax is the leader Virginia needs now.”

However, the scandals faced by Northam and Cuomo differ in key ways. The photo Northam allegedly appeared in was taken while he was at medical school decades ago, whereas the allegations against Cuomo are from the here and now, while he was and is still serving as the Governor of New York.

The White House was yet to weigh in on whether President Biden thinks that Cuomo should resign. White House Press Secretary Jen Psaki said last week that the president believes “every woman should be heard” and there should be an “independent review” of the allegations against Cuomo.

But that statement was made before the latest allegations against the Governor came out.

Cuomo has vehemently denied ever touching any woman inappropriately but has taken some responsibility for the accusations. But he only apologized “that I acted in a way that made people feel uncomfortable” and said it “was unintentional, and I truly and deeply apologize for it.”

4 thoughts on “A Defiant Cuomo Says He Will Not Resign”