What Ever Happened to the Springfield Three? 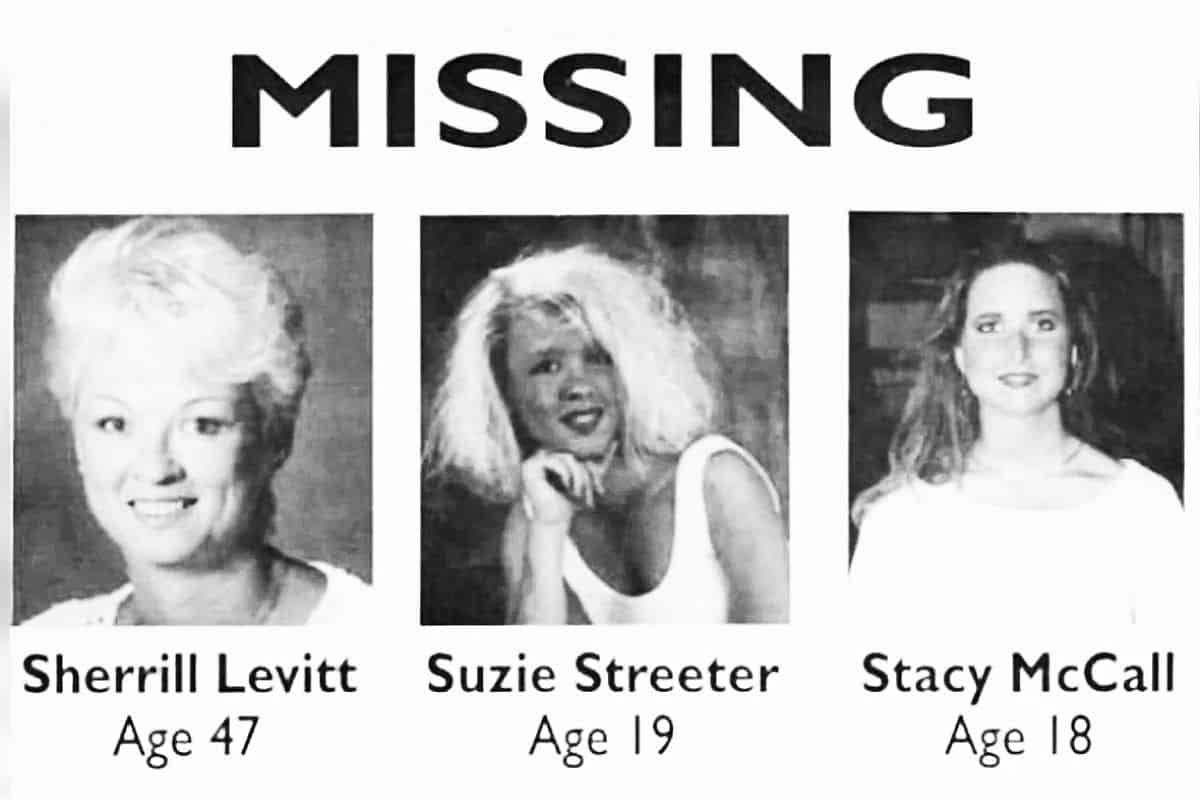 Nearly 30 years after what should have been a celebration of a High School graduation for two Missouri teens and one of their moms, instead has turned into tragedy and an unsolved mystery.

It was 1992, and Suzie Streeter, 19, and her lifelong friend Stacy McCall, 18, had just graduated from Kickapoo High School on June 6. They were celebrating with their classmates, bouncing from graduation party to graduation party, and were last seen around 2:15 A.M. on June 7 as they left their final party of the night. At this point, the two young women made their way to the Streeter/Levitt home to spend the night.

Sherrill Levitt was 47 at the time. She was a local beautician and well known in the neighborhood.

It was assumed that the younger women, Suzie and Stacy’s, had made it to their intended destination since their belongings – purses, clothes, cigarettes, makeup, etc. –  were later found at the Levitt home. Their cars were also in the driveway.

However, the next morning, when friends arrived at the Levitt home, neither Suzie, Stacy, nor Sherrill were anywhere to be found to their shock and surprise.

The teens intended to continue their post-graduate celebrations by going on a trip to a local waterpark with a group of friends that day, June 7. Suzie and Stacy were expected to meet that morning at another friend’s house, Janelle Kirby, then hook up with the rest of the group and proceed to the water park. When the pair had not arrived as planned at Janelle’s, she and her boyfriend decided to go over to the Levitt home. They then discovered that the girls and Suzie’s mother, Sherill, had gone missing.

Before realizing that something may have been amiss when they arrived at the home, they noticed the porch light globe was broken, though the bulb was still on. Janelle’s boyfriend kindly grabbed a broom and swept up and disposed of the glass that littered the porch. He thought he was being helpful; little did he know that he was unwittingly contaminating a crime scene and tampering with what could have been critical evidence.

The front door was unlocked, so they let themselves in. Upon entering, Janelle and her boyfriend noticed everything was intact. There were no signs of struggle. Beds had seemingly been slept in, packs of cigarettes were still present, and the cars were all parked in the driveway. Even Suzie’s Yorkshire Terrier, Cinnamon, was at home, though the small dog appeared agitated.

Suzie, Stacy, and Sherrill were nowhere to be found.

Not overly concerned and thinking the three just went out for a walk or something, Janelle and her boyfriend decided to leave. However, just before they did, something odd happened. The phone rang, and Janelle decided to answer it. The caller didn’t identify himself but began making lewd sexual comments, so Janelle hung up, assuming it was a prank call. She and her boyfriend left the home.

The Day Wears On

The day wore on with no sign of the missing women. By late in the afternoon, word had spread to Stacy’s mom that no one had heard from the girls. She herself had tried to phone Stacy several times at the Levitt house. Concerned, she went over to check on her daughter. She was met with the same eerie scene as Janelle, and her boyfriend were earlier in the day. The TV in the bedroom was turned on, tuned to static; personal items were left behind. Janis noticed that her daughter’s bathing suit, car keys, makeup kit, plus a change of clothes were arranged neatly in a pile. There was evidence in the bathroom to suggest the girls had taken off their makeup from the night before. Strangely, the purses of all three women were lined up along a step leading to Suzie’s room. Reports indicate that there was a voicemail left on the machine, but it was accidentally deleted: presumably while someone tried to listen and had either inadvertently or purposefully erased the message.

Nearly 16 hours had passed until police were called. In that time, more well-meaning and concerned friends and neighbors had come to the Levitt home, unintentionally further trampling the crime scene.

The police investigation immediately turned towards Sherrill’s son Bartt Streeter, who had a history of fighting with his mother and sister about his drinking problem. After providing authorities with an alibi, however, Bartt was ruled out as a suspect. Authorities also suspected Suzie’s ex-boyfriend Dustin Recla. Dustin and his friend Michael Clay were already on the authorities’ radar, having been charged with vandalizing a mausoleum at a local cemetery and removing gold teeth from a corpse. Dustin and Michael cooperated with the police, however, and were ruled out as suspects.

Authorities continued to search for clues yet turned up precious little. Days became weeks, weeks became months, and the case of “The Springfield Three” went cold.

In 1996, the police thought they had a promising lead in the case.

A man imprisoned for murder in Texas, Robert Craig Cox, had his conviction overturned, and the known killer with a serious rap sheet of other charges including assault and kidnapping returned to his home of Springfield in 1990, just two years before the haunting events of June 7.  He was considered a suspect when the women first went missing. Cox worked as a utility worker at the time of the disappearance of the Springfield Three. Cox also reportedly worked as a mechanic at a used car lot where Stacy’s father was employed as a salesman. He was interviewed by police in 1992 but claimed he was with his girlfriend on the morning of June 7. At the time, Cox’s girlfriend had corroborated his alibi.

But, in 1996, while once again in prison, now doing 30 years for armed robbery, he told a local news reporter who was doing a story on the “Springfield Three” that he knew where the women were buried and that police would never find them. His girlfriend also recanted her confirmation of his alibi for June 7, 1992, when the women had gone missing. The police reopened the case, with Cox now as their prime suspect.

However, as the investigation into Cox continued, authorities were uncertain as to whether Cox was just lying about his involvement to keep himself in the limelight. While Cox was a promising suspect, authorities had no concrete evidence with which to pursue. Eventually, the case went cold yet again.

Police never really had any solid leads to pursue. Perhaps had they been called in earlier, before much of the crime scene had been contaminated, the case could have taken a much different turn. Investigating the case of the Springfield Three has led to nothing but dead ends and frustration. Theories about what happened to the women that night run the gamut from kidnapping and human trafficking to calculated murder.

What really happened that night in 1992 remains an unsolved mystery. Was it an abduction planned in advance? Was it perpetrated by just one person? Did the women leave willingly, as there were no obvious signs of a struggle? All of these questions continue to gnaw at authorities and heavy on surviving family members. Despite approximately 5,000 tips over the years, the case remains baffling.

In 1997, the police officially declared the three women legally dead. Still, the case has not yet been closed, so any information that you do have is still welcome by the police.

2 thoughts on “What Ever Happened to the Springfield Three?”