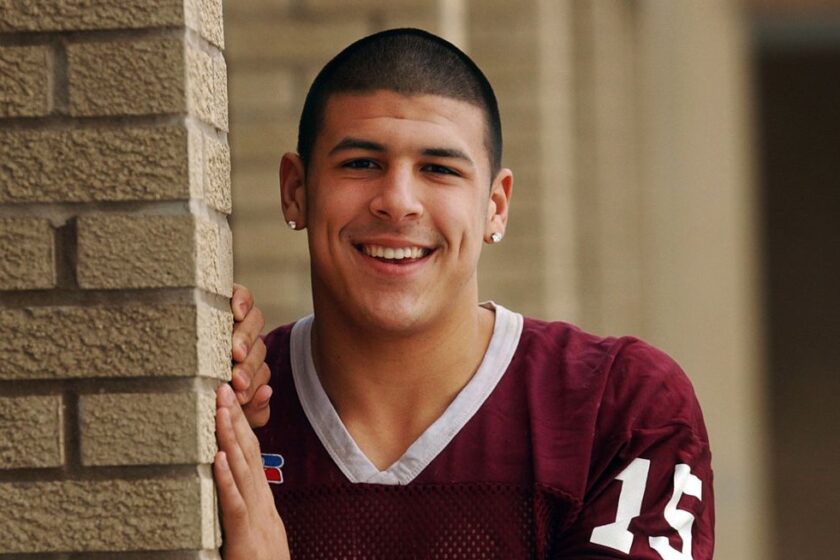 It’s a story just made for the tabloids: sex, murder, suicide, and the NFL.

Aaron Hernandez was a rising star in the NFL, but on June 26, 2013, the nation awoke to the sight of Hernandez being escorted out of his Massachusetts home by police, a T-shirt pulled over his handcuffed wrists.

Hernandez, a tight end for the World Champion New England Patriots, was charged later that day with the murder of Odin Lloyd, whose body had been found six days earlier near Hernandez’s home. Since the day of that stunning arrest, Hernandez’s story just got more and more bizarre and more tragic. It becomes a twisted story of more murders and lurid sex that eventually ended with Hernandez being found dead in his cell of an apparent suicide.

Soon after his arrest for Lloyd’s murder, Hernandez was charged with two previous murders and implicated in the shootings of three other people in two separate incidents dating back to his college days.

Before he was charged with the 2013 killing of his then friend, Odin Lloyd, Aaron’s friends and family say that Hernandez was a depressed and troubled individual with an “unpredictable” personality.

After police found stacks of evidence pointing to the vicious murder of Llyod and linking him to the two other killings, he was given a life sentence. He was soon found dead in his prison cell, though many who knew him and the company he kept, refuse to believe it was a planned suicide.

Now a new book alleges that all of Hernandez’s violence and murders were an attempt to hide his repressed homosexuality. In the book, Aaron Hernandez’s Killing Fields, the author alleges that before he may have killed Odin Lloyd for maybe the same reason, Hernandez hatched a paranoid plot to kill a male stripper in a bid to hide his sexuality and his secrets. The book tracks down a former Marine Corps member, Chad, who describes an encounter he had with Hernandez and his friends when he was working as a male stripper.

He describes how he was hired for a bachelorette party, but when he arrived, it was Hernandez and a number of his male friends who offered Chad $4,000 if he were to dance for them instead. Chad took the offer but became wary after he noticed a lot of the guys were doing drugs and carrying weapons.

After Hernandez became too affectionate with him and the party started to get out of hand, Chad left but was still owed $1,200 by Hernandez.

He then described how he got a call a few days later from Hernandez saying he wanted to make amends and pay him, so he recruited a friend and met Hernandez at his residence in North Attleborough, Massachusetts.

Upon his arrival, Chad left his friend in the car and went to the house. He described Hernandez’s behavior as weird as he led him to the basement of the property. Chad then says Hernandez got a call that made him even more wigged out.

As Chad describes in the book, “The call has to be from some guy outside, and he’s saying ‘Hey man this isn’t going to work. I’ve been talking to this kid [the friend Chad left outside], and the situation is just way too hot — It’s not going to play out like we want it to.”

At this point, Hernandez hits himself in the head while shouting “f**k” and argues with his associates some more before eventually pulling out an envelope and giving it to Chad.

Chad alleges that Hernandez then told him, “If you don’t disappear, I’m going to make you disappear. Keep your mouth shut, or I’m going to f***ing find you.”

Chad said he then left in a hurry and felt like he had narrowly escaped death.

The author of the book, investigative journalist Dylan Howard, also alleges that while in prison, Hernandez bragged of a fourth murder. In an interview promoting the book, Hernandez’s cellmate and so-called “boyfriend,” Kyle Kennedy, said, “Aaron always used to tell me he had four murders. He would just always, all the time joke around saying ‘I got four bodies.’”

The book claimed Hernandez, who was allegedly involved in gangs for years, assembled a “crew” of thugs and went looking for Lloyd a week before he was shot dead in June 2013. The crew may have instead found Jordan Miller, who was gunned down in his home in a still-unsolved murder case.

The new expose alleged Lloyd and Miller looked physically similar and were likely acquaintances because they ran in the same circles.

Renowned former police detective Bo Dietl claimed in the book that Miller could have been murdered. “It sounds like Hernandez gets a tip from one of his goonies. That Odin Lloyd is at this location. Then Jordan Miller is shot inside his home from a drive-by shooting through the window. It’s very possible that Odin Lloyd could have been in that apartment, and if they look similar, which I believe they do. They shot the wrong guy that time.”

The Murder of Odin Lloyd

Odin Lloyd was just 27 years old when he was shot dead in 2013. Lloyd was an aspiring professional athlete himself, working as a linebacker for the Boston Bandits of the New England Football League (NEFL) when he developed a friendship with Hernandez.

Llyod met Hernandez through his girlfriend, who was the sister of Hernandez’s fiancée, Shayanna Jenkins. When he met Hernandez, he and Lloyd became fast friends, and Llyod figured the friendship with the NFL star could only help him advance his own hopes of an NFL career.

Unfortunately, what Lloyd wanted wasn’t what mattered as he soon found himself dragged into the fear-driven, unpredictable, and violent currents of Aaron Hernandez’s personal life.

Aaron Hernandez had a string of legal issues under his belt by the time he murdered Odin Lloyd. There was a bar fight and a double shooting in Gainesville, Florida, in 2007, though he was never charged in either case. Hernandez got into another violent bar fight in Plainville, Massachusetts, but the police recognized the by-then-famous football player and let him go.

There was the double homicide in Boston in 2012, though Hernandez was acquitted of those murders in 2014, and a shooting in Miami in 2013 for which he was also acquitted.

There was only one criminal act that ever officially stuck to Aaron Hernandez, and unfortunately for Odin Lloyd, it was for organizing and executing his murder in 2013.

The inciting event in Lloyd’s murder occurred at a Boston nightclub called Rumor on June 14. Prosecutors asserted that Hernandez was enraged when he saw Lloyd chatting with men whom the NFL star had previously had an altercation. It only took two days for Hernandez to text two out-of-state friends, Carlos Ortiz and Ernest Wallace, to ask for help in dealing with Lloyd’s perceived betrayal.

“You can’t trust anyone anymore,” he wrote them.

After Wallace and Ortiz arrived from Connecticut, Hernandez left his home and got in their car. Then, the three picked up Lloyd at his house around 2.30 a.m. It was the last time Lloyd would be seen alive. Workers at an industrial park in Boston said they heard gunshots between 3.23 a.m. and 3.27 a.m.

Lloyd’s body was discovered in that same park later that day. Five casings from a .45-caliber gun were found near Lloyd’s body, which had five gunshot wounds to his back and side.

Hernandez’s involvement in the murder was suspected almost immediately as he was the last person seen with Lloyd, and he was arrested nine days later. He was charged with first-degree murder. When video evidence emerged showing him returning home on the morning of the murder with a gun in his hand, his fate was sealed.

He was found guilty on all charges in Lloyd’s murder in April 2015 and sentenced to life in prison without the possibility of parole.

As for Hernandez, he would only serve two years of his sentence before he took his own life on April 19, 2017, by hanging himself using his bedsheets in his cell.

In the end, the motives for Lloyd’s murder are still not 100% clear. Howard’s book fuels the speculation that Hernandez was afraid Lloyd discovered his alleged homosexuality and feared being exposed. Yet there are still others who believe that Lloyd’s alleged disloyalty at the nightclub was the only reason an increasingly paranoid and unstable Hernandez needed.

An autopsy of Hernandez’s brain revealed a “shocking amount of brain damage” in a man so young. Dr. Ann McKee, a neuropathologist who specializes in chronic traumatic encephalopathy (CTE) at Boston University, said that alone could have accounted for Hernandez’s pathological paranoia and violence.