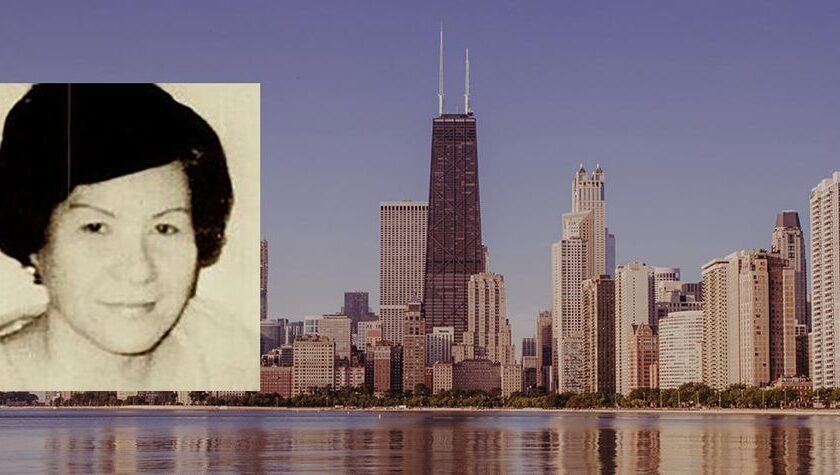 Murder Solved by the Victim’s Ghost!

Did the ghost of a woman from the Philippines reach out from beyond the grave to point her finger at her murderer?

Those of you who enjoy my columns know that I write a lot of stories about ghosts and the paranormal, as wells as those on true crime. Rarely do those two worlds intersect; one, true crime is based on fact and solid evidence, while paranormal stories usually have little or no hard evidence to back them up. But the bizarre case of Teresita Basa is one where those two worlds collide.

Originally hailing from the Philippines, Teresita Basa lived in Chicago, where she worked as a respiratory therapist at Edgewater Hospital. A reliable worker and a quiet woman, she was going back to school for a doctorate in music and even taught piano lessons from her apartment. By all accounts, Teresita was the last person expected to become the victim of a violent crime.

However, on the evening of February 21, 1977, neighbors who lived down the hall from Teresita contacted their apartment building’s janitor when they smelled smoke but couldn’t tell where it was coming from. Concerned, the janitor, called the fire department before evacuating the building’s residents. When firefighters arrived, they located the source of the fire, Teresita’s apartment.

The firefighters quickly extinguished the blaze but then made the shocking discovery that it was likely started to hide Teresita’s body, which was found naked, below a smoldering pile of clothing, with a butcher knife still protruding from her chest. Apparently, the clothes were thrown over her corpse before being set ablaze. A mattress had then been placed over her body and subsequently set on fire as well. This left detectives little doubt that the murderer had used multiple fires to destroy any physical evidence they could use to find the killer.

Since Teresita was found in the nude, the police logically assumed she had been the victim of a sexual assault before being brutally murdered. However, much to their surprise, the autopsy revealed otherwise. Left with no apparent motive and most of the physical evidence having been destroyed by the fire, detectives were at a loss. Their only significant clue was a note Teresita had written, “Get theatre tickets for A.S.,” Which raised the question, Who was A.S?

For the next several weeks, detectives interviewed people who knew Teresita, neighbors, coworkers, friends, and her classmates. Their efforts yielded few leads. No one had any idea who would have wanted to murder someone who, by all accounts, was a hard-working, kindly, and unassuming young woman. Despite many pleas for assistance, police failed to find any leads, and soon, the case went cold.

The case stagnated. It was not until six months later that a clue from a very unlikely source came through. A woman named Remibias “Remy” Chua came forward. Also hailing from the Philippines, Remy worked at Edgewater Hospital with Teresita. Remy told detectives that soon after her coworker’s murder, she would see Teresita in her dreams. In these dreams, Teresita would beg her to go to the police and tell them what happened. According to Remy’s husband, during one of these episodes, Remy began talking in her sleep—except he said the voice didn’t belong to his wife. The voice claimed to be Teresita Basa, and she told Remy’s husband that a man named Allan Showery had killed her. The voice revealed that Showery was an orderly who also worked at Edgewater Hospital. Allan Showery – A.S., was this the A.S in Teresita’s cryptic note?

Despite these explosive revelations, Remy remembered nothing of what she’d said after she woke up. At first, her husband decided not to go to the police. His reluctance is understandable. No one wants to tell police that they learned information about a violent crime from a ghost, especially when there’s no evidence corroborating the claims. That’s an easy way to make detectives suspicious of your potential involvement in the crime.

He eventually did because he could no longer take being “haunted” by Teresita’s ghost, who persisted in taking possession of his wife night after night, who, in a trance-like state, continued to plead with him to go to the police about Showery. After telling her that there was no evidence of Showery’s involvement, Teresita’s ghost told her that Showery had taken some of her jewelry and given it to his girlfriend.

Upon hearing this account from Remy and her husband, detectives were rightfully dubious. It sounds unbelievable. Nevertheless, they investigated the claims. After all, Allan Showery did have the initials A.S., matching information from their one and only clue. What they found surprised them. Showery lived near Teresita. According to coworkers, he’d planned to go to her apartment to fix her television the evening of her murder. When detectives brought him in for questioning, Showery confirmed he had indeed gone to her apartment that evening but had gone home after he’d realized he didn’t have the right tools to complete the repair.

Something sounded fishy to them. Skeptical of Showery’s recounting of events, detectives then contacted his girlfriend. They learned she had recently received some jewelry from him. Following this lead, the girlfriend allowed Teresita’s friends and family to examine the jewelry. They confirmed it had belonged to the deceased woman, just as the “ghost” had told Remy’s husband!

Shortly thereafter, Showery confessed to the crime. He said that after he’d left her apartment the first time, he planned to return and rob her. His efforts yielded little reward, though. Teresita kept little cash in her apartment, and as a result, Showery ended up taking the jewelry that eventually led to his capture. Without those pieces and Remy’s aid, he would never have been caught. While his plan to mask the robbery as a sexual assault quickly unraveled, the multiple fires had been quite effective in destroying any physical evidence at the scene.

Showery was charged and tried for Teresita’s murder. Despite confessing his crime to detectives, he pleaded not guilty. When the trial ended in a hung jury, it seemed like Showery would get away with murder. But while he waited in prison for a retrial, he had a change of heart and pleaded guilty. While the obvious explanation for this reversal was a sentence reduction, people whispered that Teresita’s ghost had visited him in prison.

A Ghost of a Chance?

The story of Teresita Basa hit newspapers across the United States as the case where a ghost solved her own murder. To this day, Remy maintains that she was possessed by the other woman’s spirit. Detectives also admit to the possibility of supernatural aid because they have no other explanation for what happened. The case would go on to be featured on Unsolved Mysteries and Beyond Belief. It was included in a book, Houses of Horror, and inspired the TV film Voice from the Grave.

Despite Remy’s insistence of paranormal involvement, there may be another non-paranormal explanation. Remy worked at Edgewater Hospital with Teresita and Showery, and it turned out Remy and Showery weren’t on the best of terms. In fact, Showery’s complaints about Remy’s work resulted in her losing her job. More to the point, Teresita’s dream visitations began shortly after Remy’s firing. But regardless of Remy’s motivations, the fact remains that everything she shared was true. Her going to the police led to the capture and conviction of a murderer.

If the supernatural was not involved, we may never know how Remy obtained this information in the first place. Did she somehow overhear Showery admitting to the crime while at work? Did her subconscious mind piece together various suspicions into a whole picture that just happened to match the truth? In the end, it might not matter. Even if Teresita’s voice never spoke from beyond the grave, the alleged paranormal connections ultimately prevented her murder from joining the legion of cases that never had a ghost of a chance of being solved.

1 thought on “Murder Solved by the Victim’s Ghost!”