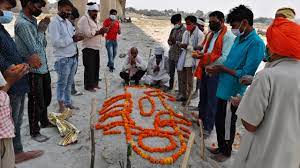 “Dead” Woman Wakes Up Just Before Being Cremated!

In the wake of a disastrous resurgence of COVID-19 in India, public cremations of the dead have become a common, if horrific, site. Recently one such scene was made that much more shocking as a “dead” woman about to be cremated arose for her pyre just before it burst into flames!

Shakuntala Gaikwad, 76, suddenly came to life in tears after being placed in a coffin while her family prepared her funeral pyre. The elderly woman had tested positive for COVID and was self-isolating at her home in Mudhale village in the state of Maharashtra, India. As her condition worsened and she was finding it near impossible to breathe, her family rushed her to the hospital.

Ms. Gaikwad and her family had been turned away from several hospitals as no beds were available. While waiting in the car, she fell unconscious and did not respond when her relatives tried to revive her. Assuming that Gaikwad had passed away, the family took her home and prepared for her cremation. The family announced her death and informed other family members about her funeral rites.

But, minutes before the pyre was set alight, Ms. Gaikwad suddenly opened her eyes and started crying, shocked to find her relatives ready to set her on fire.

Her family took her to a hospital, and this time she was able to be admitted; and they say that she is now receiving oxygen and further treatment and tests.

Police officer Santosh Gaikwad confirmed the incident occurred in Mudhale village. After she woke up, the woman was taken back to the Silver Jubilee Hospital for treatment.

While the US continues to see a drop in cases and COVID-related deaths, India is now the epicenter of the pandemic in Asia, with more than 24 million cases and 270,000 deaths. The second wave of the virus is ravaging large parts of the country, and many hospitals have run out of beds or oxygen to provide even the most basic treatments.  This past weekend the country reported roughly 326,000 new infections over within 24 hours. That was the smallest daily rise for more than two weeks. However, the daily reported death toll remained steady at 4,000.

Many of the country’s crematoriums have run out of space, and dead bodies have been dumped in the Ganges river. Police have started patrolling the Ganges after citizens began disposing of bodies in the transboundary river, according to a government official. “We keep recovering 10 to 20 bodies every now and then,” said Navneet Sehgal, a spokesperson for Uttar Pradesh, a state in northern Indian with about 200 million residents.

In September, India’s first wave of COVID-19 saw the country reporting nearly 100,000 cases per day. New case figures dipped by roughly 80 percent at the start of 2021, before the second surge devastated the South Asian country.

India became the second country after the U.S. to hit 20 million total cases last week. World Health Organization chief Tedros Adhanom Ghebreyesus has said that 2021 is expected to be a far deadlier year of the pandemic than 2020 for India.

On Monday, the WHO classified the B.1.617 variant, first observed in India’s Maharashtra, as a “variant of concern” for the world that could spread at a faster rate than earlier variants.