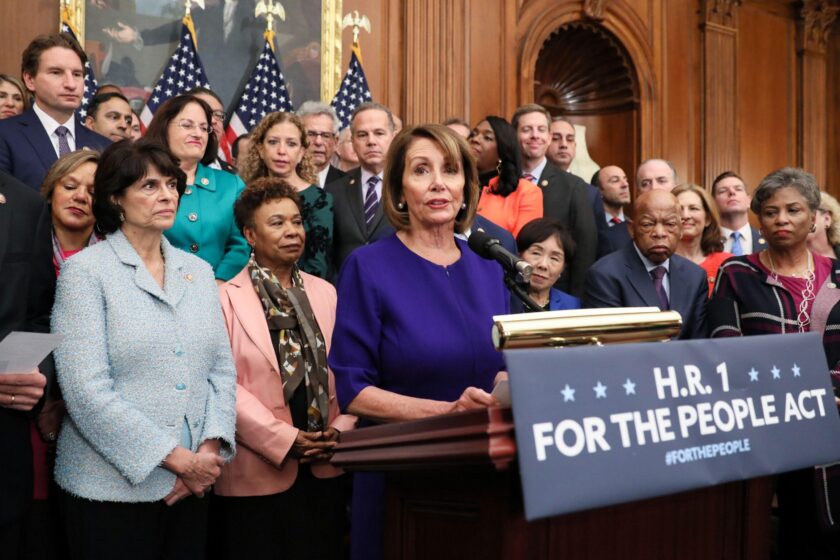 Americans do NOT Support the For the People Act

Despite what left-wing Democrats would have you believe, most Americans do not support the For the People Act.

New polling shows that the poorly named “For the People Act,” which was dead on arrival in the Senate, does not have the support of most Americans. According to a survey conducted by Echelon Insights, “public campaign financing is deeply unpopular,” with more than two-thirds of voters opposing the idea.

A poll commissioned by the Honest Elections Project found that more than 75 percent of voters support requiring a photo ID to cast a ballot, a practice that states would be barred from employing under the provisions of the For the People Act.

The same HEP poll also found that only 11 percent of voters want to allow the practice of ballot harvesting—something all states would have to allow under the Act, should it pass as drafted, while more than 60 percent think such unsupervised collection and casting of ballots should be illegal.

The opposition to the key pieces of the For the People Act means that fewer than three-in-ten Americans support the passage of S.1 (as the bill became known in the Senate, in the House it was H.R.1) HEP’s poll also showed.

Now that debate of the For the People Act has been struck down because not a single Republican voted for it, the Democrats are going to try to spin that into saying that the GOP has gone against “the will of the people” in support of its own political agenda. But these polls say otherwise, that the vast majority of Americans agree with Minority leader Mitch McConnell who said that the Federal Government has no business in legislating elections, that should be left to the states, and that our current system is “not broken.”

Senator John Kennedy (R-LA) called S.1 “ruthless, even by Washington standards” during an  interview before the vote, adding the bill would be more aptly named the “Screw the People Act.”

Since the bill stalled in the Senate, Progressive Democrats are stewing after one of their top priorities has been dashed, and they’re directing their ire at several targets, including Republicans, the Senate filibuster, and even President Biden, who they allege didn’t do enough to stump for the legislation.

“He’s not absent, but he needs to be a lot more vocal and a lot more out front. The president supports H.R.1; the American people support H.R. 1 overwhelmingly. The president needs to lead out front and be very vocal on this issue.” Rep. Jamaal Bowman, D-N.Y., told CNN Tuesday of the president’s involvement on election reform.

Rep. Mondaire Jones, D-N.Y., meanwhile, said it’s not clear to him the president is serious about voting reform. Biden “just sort of stared at me,” Jones told the Associated Press about an interaction between the two men after Jones told Biden he needed to be bolder in lobbying for S.1.

For their part, Republicans hammered home the very problems with the bill that the earlier mentioned polls showed that most Americans were against. That the bill was too far-reaching and would take the constitutional power to administer elections away from the states. They argued S.1 would establish a federal election system designed to benefit the Democratic National Committee by stacking the Federal Election Commission with a Democrat majority, expanding mail-in voting, and allowing minors to vote.