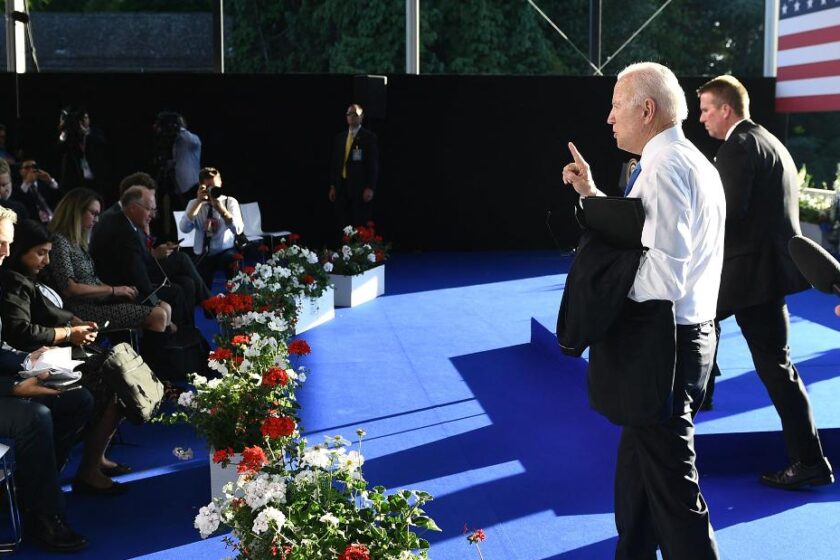 The mainstream media continues to treat Joe Biden very different than they did Donald Trump, especially as regards his gaffs and temperamental outbursts.

It is no secret that CNN, The New York Times, The Washington Post et al, where quite harsh in their criticism of President Trump, particular when it come to his attacks on them, and calling them out for their fake news and their political bias. However, when it comes to President Biden, there seems to be no such push back when he makes similar accusations.

Biden’s latest hostility towards the media was directed at CNN’s Kaitlan Collins after his meeting with Russian President Vladimir Putin. After asking Biden how confident he was for a change in Putin’s behavior, Collins was met with frustration.

“…What the hell? What do you do all the time? When did I say I was confident?” Biden rambled. “I said what will change their behavior is if the rest of the world reacts to them and it diminishes their standing in the world.”

The left-learning corporate media world was quick to perform damage control for Biden after his outburst. Vox’s Aaron Rupar tweeted “it would’ve served Biden better to not lose his temper with Kaitlan Collins, but the problem with her question is she put words in Biden’s mouth that he didn’t say.”

Biden went on to apologize later in the day, which Collins was all too happy to accept. Although she expressed appreciation for his efforts, the reporter went on to claim his apology was completely unnecessary.

The episode comes in stark contrast to a situation in 2020 when President Trump walked out of a press conference once Collins attempted to take control and criticize his handling of coronavirus. Collins, who is CNN’s’ Chief White House Correspondent, went on to notably attack former President Trump after the election and blamed him for the events at the Capitol on January 6.

As OAN reports, CNN’s Collins is not the only member of the mainstream media seemingly applying different standards to Biden than they did to Trump. In January, Biden snapped at Associated Press reporter Zeke Miller when asked about his vaccine goals.

Miller never responded to this criticism by Biden. However, he did take aim at Trump when the he went to wave at supporters while hospitalized from coronavirus last year. Miller called Trump thanking his supporters outside Water Reed Medical Center outrageous and implied he didn’t take his job as president seriously by going out in a health crisis without a protective pool.

Although many in the mainstream media consistently sought to tarnish Trump for defending himself and expressing concerns about the accuracy of their reporting among other issues, they do not appear to be taking the same approach to Biden.

In  fact members of mainstream media have been squarely on President Joe Biden’s team since before Election Day 2020. Lets not forget that it was not until Dec. 9, 2020—more than a month after the election—that the media felt safe to report on the FBI investigation into Hunter Biden.

Now several month’s since they helped install him in the White House all of the major news outlets have continued their practice of slanted reporting, both to continue heaping scorn on Trump and to promote Biden.