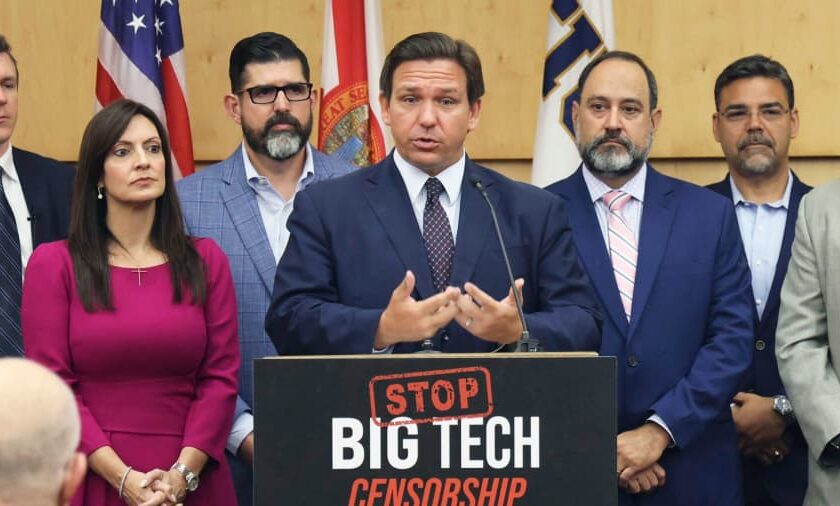 In the ongoing battle between Florida Governor Ron DeSantis and big tech companies, the social media giants are firing back and suing the state for DeSantis’ “deplatforming” law.

The bill, passed by the GOP-dominated state Legislature and signed by DeSantis on May 1, makes it a crime to remove state political candidates from Twitter and Facebook and assigns penalties of $250,000 a day for any statewide candidate who is thus “deplatformed.”

Removing more local candidates would cost the company $25,000 a day.

The bill also requires tech companies to give users seven days’ notice that they are at risk of being banned and offer them the opportunity to correct the issue. Suspensions of up to 14 days would still be allowed.

DeSantis has said the law protects citizens from online censorship.

The lawsuit was filed by NetChoice and the Computer & Communications Industry Association. It asks that the US District Court for the Northern District of Florida to overturn the law, claiming that it “infringes on the rights to freedom of speech, equal protection, and due process protected by the First and Fourteenth Amendments,” and that it exceeds the state’s authority to regulate interstate commerce. It also goes counter to the Communications Decency Act, the suit claims.

The groups argue that the law targets the tech giants they represent and is a “blatant attack” on their efforts to moderate content from a long list of “harmful, offensive or unlawful material,” including pornography, terrorist incitement, false propaganda, and conspiracy theories, personal privacy violations, and even online scams.

The suit notes that other companies, particularly ones with huge theme parks in Florida like Disney, don’t have to live by the same kinds of  “burdensome restrictions.”

“Rather than preventing what it calls ‘censorship,’ the act does the exact opposite: it empowers government officials in Florida to police the protected editorial judgment of online businesses that the state disfavors and whose perceived political viewpoints it wishes to punish,” the suit said.

Many legal experts have weighed in, saying that the Florida law oversteps the bounds of the constitution and feel that the companies will likely prevail. “This is so obviously unconstitutional, you wouldn’t even put it on an exam,” A. Michael Froomkin, a law professor at the University of Miami, told Wired magazine.