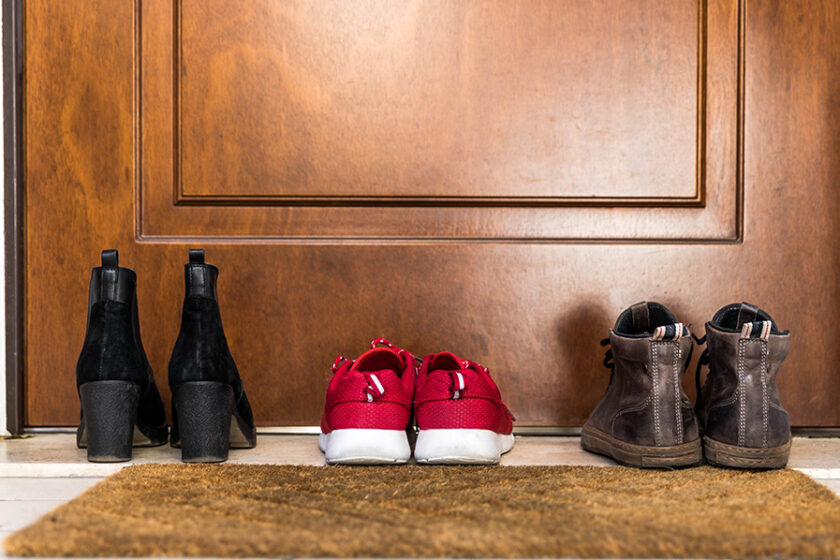 The Value of Tradition: Is There a Benefit from Taking Your Shoes Off When Entering a House

A former colleague of mine married a Japanese woman while he was stationed in Japan. I have been to their house several times and each time, I’ve been asked to remove my shoes when entering and leave them on a mat just inside the door. I quickly learned that this has been the custom in Japan for centuries. I asked his wife why they take their shoes off and she said that it’s always been the custom, but wasn’t really sure why. I did notice that they all wore slippers in the house, but guests stay in stocking feet.

“If you have been to Japan, you know that its people have deeply entrenched traditions about removing their shoes before entering homes and other indoor places.”

“The custom of removing ones footwear before entering a house stems from the Heian period between the years 794 and 1185. While a house could quickly become dirty if people entered wearing mud-covered straw sandals (zoori) or clogs (geta), the more likely reason that shoes were left outside was the custom of sitting, eating, and sleeping directly on the floor or straw mats.”

“The entryway, or ‘genkan,’ of a house in Japan is a small sunken room where shoes are removed. Guest will be reminded of this custom when they see a line of shoes on the floor or a ‘geta-bako’ or shoe cupboard. According to custom, if a guest places their shoes on the floor, they should face outwards towards the door. Nearby, as one steps up into the house, there is likely to be a slipper rack, holding pairs of slippers to be worn while in the house.”

Over the years, I’ve been to the homes of non-Japanese and found that they also asked visitors to leave their shoes at the door. I never questioned why as I figured it was their house and their way of doing things. One woman did venture to say that they didn’t want to get their carpets dirty as they just had new carpeting put in.

However, is there a good reason today for taking ones shoes off when entering a home? Could there be a health reason for removing shoes? Check this out:

“Are you one of those hosts who’s immediately gripped by this conundrum as your guests step across the threshold into your home: Should you, or shouldn’t you, ask them to remove their shoes?”

“On the one hand, it makes you look like a fussy host. On the other, what about the legions of disease-causing bacteria that will gleefully leap off their shoes and inevitably infest your home?”

“Avoiding bacterial invasion at the risk of a little social awkwardness seems like a no-brainer. But are shoe bacteria something we should really be worried about in our homes? Here’s what science tells us about how to navigate this conundrum.”

“To start with, there’s no point in sugarcoating the pill: the average shoe harbors ‘hundreds of thousands of bacteria per square inch,’ according to Jonathan Sexton, an environmental microbiologist and research specialist at the University of Arizona. The soles of our shoes are essentially a meet and greet for these microbes, and with each step we take, we pick up new attendants. ‘Pretty much wherever you go, you’re going to be picking up stuff,’ Sexton told Live Science. (Beware, however: Some places like bathrooms do harbor more bacteria and a greater diversity, he said.)”

“But exactly what types of bacterial communities are hanging out on our shoes, and do they pose a legitimate health threat? Well, previous studies have shown that (prepare yourself) almost all shoes in some research samples were coated with fecal bacteria, including one prominent bug called Escherichia coli (E.coli), which researchers discovered on 96 percent of shoe soles. While many types of E.coli are harmless to humans, some strains can cause severe diarrhea, urinary tract infections and even meningitis. ‘Not necessarily on every shoe, but on a good majority, you can find some type of E.coli there,’ Sexton said.”

“Apart from this ubiquitous germ, other studies have also found evidence of things like Staphylococcus aureus, which underlies a wide range of skin infections, and more worryingly, infections of the blood and the heart. Another prominent study published in 2014 in the journal Anaerobe sampled 30 households in Houston, Texas, for the presence of Clostridium difficile (C. difficile), a bacterium with a long lifespan that commonly causes bowel problems like diarrhea. Of all the household items they sampled, the researchers found that shoes harbored more C. difficile than even the surface of a toilet — underscoring the power that grubby soles could have to spread germs through a home.”

By now, you may be ready to freak out and grab every shoe in the house and either throw them outside or douse them in a disinfectant. Before you do, the report went on to say:

“But despite the horrifying picture this paints of microbe-infested interiors, the research doesn’t actually give us anything too serious to worry about. While many of us might want to launch into a house-cleaning frenzy at the thought of a wayward shoe, the reality is that the load of bacteria our shoes bring indoors isn’t typically high enough to make the average healthy person very sick. ‘For a healthy individual, bacteria on shoes likely pose no or minimal risk,’ said Kevin Garey, the author on the 2014 C. difficile study and professor at the University of Houston College of Pharmacy. Usually, a healthy person would need to come into contact with thousands of microbes from one harmful bacterial strain to actually become infected with something, Sexton added.”

Another reason not to freak out is that most of us don’t spend that much time on the floor, so will have little exposure to anything the shoes track in. However, if you have kids, especially young ones that spend a lot of time on the floor, you may want to consider shoe removal for all who enter, along with regular vacuuming of carpets and rugs and mopping of uncarpeted floors. For most of us, wearing shoes in the house really doesn’t pose that much of a health problem.

The bottom line is that in your house, you set the rules for whatever reason you want, but remember that having guests take off their shoes here in America can be awkward for some, especially if they have a foot odor problems or holey socks.