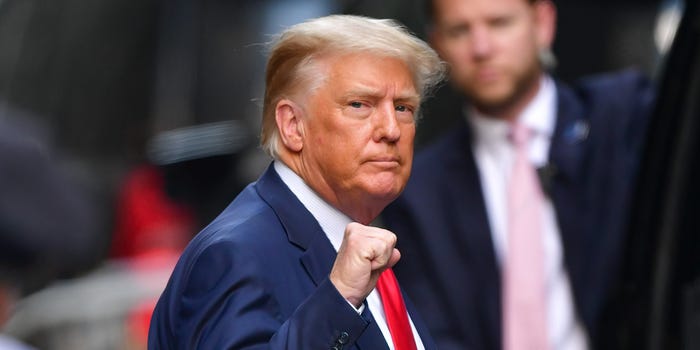 Trump Back on the Stump in Ohio!

President Trump returned with a vengeance at his first campaign-style rally since apparently losing the White House to Joe Biden.

President Trump came out swinging in Ohio as he apparently kicked off his 2024 presidential campaign with the return of his super-popular large-scale rallies. In his inimitable style, the former president pulled no punches as he mocked the nation’s “woke generals” and bashed their embrace of critical race theory during his first post-White House rally.

“The Biden administration issued new rules pushing twisted critical race theory … into our military,” Trump told several thousand supporters gathered at the Lorain County Fairgrounds. “Our generals and our admirals are now focused more on this nonsense than they are on our enemies.”

“You see these generals lately on television? They are woke,” he said.

“Our military will be incapable of fighting and incapable of taking orders,” Trump predicted — imagining a future private refusing to comply with a general’s order.

“That private’s going to tell the general, ‘Don’t you ever speak to me that way, general — I’ll kick your ass,’” Trump said. “That’s our military, that’s where we’re going. Woke.”

His jibes were targeting Gen. Mark Milley, chairman of the Pentagon’s Joint Chiefs of Staff, who defended critical race theory — the idea that racism pervades all of American society — and its use in the West Point curriculum before the House Armed Services Committee.

“The military brass have become weak and ineffective leaders,” Trump charged. “And our enemies are watching, and they’re laughing.”

Just because Trump targeted Milley and other military officials don’t think that Joe Biden was spared. Trump took a few potshots at his former opponent as well. Trump slammed President Biden repeatedly during the 90-minute speech — between lengthy asides on the allegedly stolen 2020 presidential election.

“Joe Biden is squandering all this hard-earned respect that we have — or had,” Trump said, “bowing down to our enemies and embarrassing our country on the world stage.”

Of course, VP Kamala Harris was also on Trump’s hit list.  He made it a point to ridicule Harris’s sudden visit to the U.S.-Mexico border.

“Kamala Harris, your vice president, only went to the border yesterday for one simple reason — that I announced that I was going,” Trump declared — referring to his joint trip with Texas Gov. Greg Abbott set for June 30.

The rally, which was held on Saturday, June 26, was meant to boost Max Miller, a former Trump White House aide who plans a primary challenge against Rep. Anthony Gonzalez (R-Ohio), one of 10 Republicans who voted in favor of Trump’s second impeachment in January — and a particular target as Trump seeks a GOP makeover in his populist image.

2 thoughts on “Trump Back on the Stump in Ohio!”