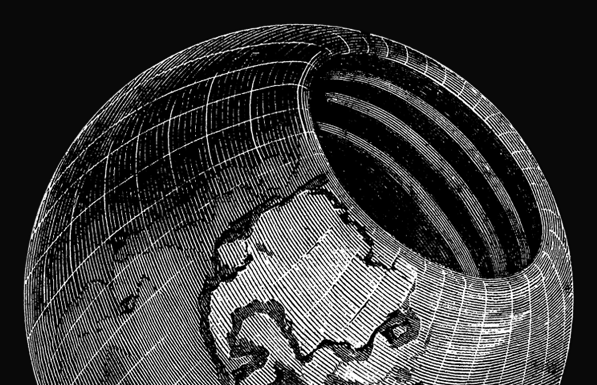 What does a ‘Hollow Earther’ Believe?

When most people think of the earth we think of a solid round sphere that orbits the sun.  It’s common to consider that there is molten rock under the surface as we witness the spewing of lava from volcanos on dry land as well as underwater.  It seems however that the earth is synonymous with the human brain in the sense that we know less than five percent of what’s in our oceans and seas and we only use less than ten percent of our brains’ mental capacity.  Truly there is much more exploration and studying need.  So, what do we really know about the earth?

For centuries dating as far back as can be recalled, there have been theories of entrances that lead to inner earth.  We all heard the story of the Devil being under the surface of the earth residing in hell supposedly.  Some of us may have heard of an ancient reptilian humanoid species that live in some of the porous caverns of the earth.  There are also great writings like Dante’s Inferno that spoke of entering lower levels of the earth beneath the surface.  So, could the Hollow Earth Theory be fact, not fiction?

Brooks A. Agnew is a writer and a scientist who supports this hollow earth theory.  One of his best works is Alienated Nation.  His uncle, Sir James Ross, was also a Hollow Earther.  He was responsible for the discovery of Ross’s Gull.  Hence the name Ross.  It was a rare seabird that Sir James discovered on his travels.  As far back as 1629, Edmund Halley hypothesized of a sequential series of crust theory having to do with the makeup of the earths’ layers.  That was just one of his many ideas that were considered crackpot at the time.  But, he is the guy that predicted that comet that comes around every 75 years I believe.  We call it Halley’s Comet.  Named after Edmund Halley of course.  So, his theory proved true after all.  He also spoke of the hollow earth.

Marshall Gardner patented in 1965 the Hollow Earth theory.  He spent a lot of his time and money researching and going on expeditions to bring proof and document information supporting this theory.  Unfortunately, Marshall Gardner died of pneumonia while searching through subterranean terrain.  During Brooks’ research, he often met people who are called channelers.  These channelers were said to be able to communicate with otherworldly beings telepathically.

Admiral Byrd is another very polarizing character.  He is famous for flying over the north pole back in 1926.  I find his story very interesting because he writes of his airships compasses losing their bearings due to being so true north. He also writes about seeing plush green lands where there were wild animals.  Some of which he never has seen before and others like the woolly mammoth that were thought to be extinct.  Admiral Byrd said that his ship was tractor beamed in by an intelligent people living in the inner earth and one of the grand entrances is the north pole.  This information was in the journals of Admiral Byrd and later presented by his son.  Most people don’t know but it is illegal to fly over the north pole currently.  Why do you think that is?

There is scientific data supporting the hollow earth theory.  There have been seismic tests done to retrieve data on the shape and formation of the earth.  Dr. Wysessions at Washington University states that “We concluded after 600,000 seismograms that deep in the earth mantel there is revealed the existence of an underground water reservoir at least the volume of the arctic ocean.  Also, strange anomalies having to do with sea creatures seem to be popping up lately.  Oceanographers do tests every five years on certain rays which are a form of fish, like the manta ray for instance.  Usually, normal would be seeing 50 or so sea creatures one would consider anomalies.  Well, in 2008 while testing they found 1500 strange sea creatures.  Some say this is happening because of underwater conduits leading to inner earth seas.