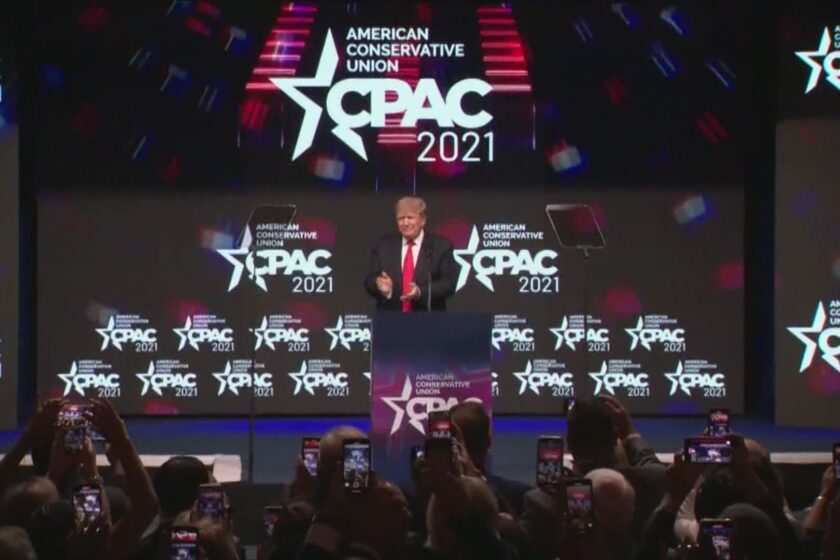 A Look at the Past, Present and Future of Donald Trump & the Presidency

For those who wish for Donald Trump to disappear from the political scene, it looks like you are facing a strong wall of support for the former President. Speaking yesterday at the Conservative Political Action Conference (CPAC) in Dallas, Texas, Donald Trump took the stage to rally continued support from his base. In a new straw poll from the event forecasting who the 2024 presidential nominee should be, Trump won in a landslide taking 70% of potential voters choice over all other potential candidates.

Others in the race include the rising star of Florida Governor Ron Desantis, who came in far behind Trump this time only taking 21%. Beyond that, everyone else included as possibilities fell to a low 1%, with many potential candidates receiving 0% of the votes. Of the 1% included the likes of Rand Paul, Nikki Haley, Ted Cruz, Tucker Carlson, Kristi Noem and Mike Pompeo. Those who received none of the votes included Josh Hawley, Marco Rubio, Ben Carson, Tom Cotton and, of course, Mitt Romney.

Of the potential candidates, my personal vote would have been for Donald Trump as well. I also share a great support for Ron Desantis, but believe he may be in a better place remaining as the Governor of Florida and should continue doing phenomenal work in the state. His leadership in that job continues to show Governors across the nation how it should be done and is a vital component of the future Republican machine regardless of potential position. When it comes to the Presidency, I think that Trump should run again and this time bring on Mike Pompeo as his Vice President, as Pompeo is one of the greatest and hardest working Americans I have seen in my lifetime. In my opinion, he deserves more recognition and respect for the work he has done. Tucker Carlson would be an interesting person to run for office as well, but the straw poll shows that he does not have the support for that position that would be necessary. Maybe, like Desantis, he serves the nation better by remaining in his position as a leading figure, if not one of the only figures, in modern media that has a free voice with support great enough to actually make the truth be heard by the American people.

Often times, as an American, people who I have supported in the past have come to let me down. From the likes of Mike Pence to Bill Barr, it is very difficult in the modern world to figure out who you can actually trust. I think that is why Donald Trump continues to keep support as he does. No matter what you think of the man and despite his mistakes, people know that he is always just speaking his true mind. People also know that the man truly loves the people of America and that he truly wants to put America first. His actions and conviction over years of time continue to prove that. Some Republicans think he has become a cult of personality in himself, but I think the majority of Americans who support Donald Trump see him not as a cult leader, but as another human who serves this nation properly as a free nation under God. I do not believe that Americans value Trump himself more than their family, the ideology of freedom or their faith in God. In order to be a cult, people would have to see Trump as more valuable than their family, their freedom or their God. I do not believe any of that to be true here, so the cult opinion is an opinion of the man that I believe to be misguided rhetoric. Regardless, the people of America are free to have whatever opinion they desire, so if you want to continue to call Trump and his supporters a cult, feel free to do so. My opinion is that the matter will continue to show otherwise over time as the truth continues to unfold.

Many will disagree with me entirely by saying this, but I am still not personally convinced that Trump was not the winner of the 2020 election. I still have many questions unanswered from last year’s events, and many people in many high places seem to have a great deal of fear about looking over the evidence. If Biden was the true victor, why is there so much fear, hate and resistance to asking questions and looking over the evidence? While Arizona continues its own election audit, the Pennsylvania Department of State just told counties not to allow outside access to voting systems. This comes right after the Senate Chairman of the State initiated forensic audits. Hard copies of ballots and election equipment were requested, along with the right to subpoena power if the requirements are not met by July 31. Now the Department of State is refusing that information, saying that it would disrupt the chain of custody for election equipment. In Wisconsin, the State Supreme court rejected hearing a case that would ban mass ballot drop boxes in the state. In Michigan, their Attorney General is reportedly, from the Epoch Times, using police to investigate anyone who supports election fraud claims. With all of this and more, why are fear tactics being used here? If the election was known by all to be entirely legitimate, what problem would there be for anyone in the position to do so to look over the evidence for potential flaws? If no flaws were found at that time, everyone could know that was the case and be able to move forward knowing in certainty that Joe Biden was the true victor. I’ve written about my opinions of election audits in previous articles. Remember, the argument that the courts have already looked at the evidence is untrue, as many of the election fraud cases passed so far were dismissed on standing alone, without proper due process allowed.

Finally, I want to take a look back at some of the things I wrote last year in my book Understanding 2020: An American Journal. Here, I wrote a day by day analysis of the information available at the time.

From November 24th I wrote, “The last few court cases on the election have been rejected. No one is willing to hear the evidence officially in court. No judge. No jury. No verdict. Just the televised expectation that everyone will just move on and stop asking questions. I do not know what to trust anymore. Maybe I don’t really trust much of anything.”

From November 30th I wrote “Department of Homeland Security issued a warning on the voting machines before the election, but the C.E.O. of Dominion still says there is no potential for problems. Talk around is it may have been connected to the internet in Detroit, Michigan. System all sounds funny to me, but I have no way of knowing what is actually the case here. Not enough tangible information. Whole thing needs analysis and audit if you ask me, but that is just my opinion.”

From December 1st I wrote, “Barr is now saying that there is no voter fraud. Maybe that is the truth, but what about the 40+ hours of recent living testimony from people working the election? I sat and listened to the entire hearing in Michigan today. Person after person with back to back horror stories. What these people are trying to tell the world has no reason to be censored and shut out from being seen. What is the purpose of any court but to hear and solve situations just like this? Why would Barr make a statement like that at the same time as a public hearing on election integrity that obviously shows evidence of problems? For any human questioning Republican claims, please take the time to find and watch the entire hearings and decide what you think for yourself.”

From December 14th, “A report on the audit of Dominion voting systems from the Allied Security Operations Group says it was fundamentally designed to influence elections and create fraud. Found missing logs inside.”

From December 16th, “First Federal Election hearing. No coverage. A quote from the recent report on the voting machines. “The system intentionally generates an enormously high number of ballot errors. The electronic ballots are then transferred for adjudication. The intentional errors lead to bulk adjudication of ballots with no oversight, no transparency and no audit trail. This leads to voter or election fraud.””

From December 29th, “New Gallup poll shows Donald Trump is now the world’s most admired man, beating out Obama’s decade run. No fake news on Earth can discount that data. The people love the gy as the T.V. does nothing but hate the guy. Just stop and ask yourself, why?”

From December 30th, “Another hearing in Georgia. The testimony of Jovan Pulitzer is worth watching. Ballots are taxpayer property and there is no reason under the sun why the people shouldn’t have free access to investigate the election results for ourselves.”

It is almost impossible to keep in mind all the information past, present and future around the events of our time. These are just my opinions and views from what I could see, and even I struggle to keep in mind everything that is happening. Here’s to yet another attempt to tell the story justly, and here’s to hoping that the truth will continue to come out through the days ahead of us. Keep an open mind, and regardless of anything, just keep on moving forward.

1 thought on “A Look at the Past, Present and Future of Donald Trump & the Presidency”