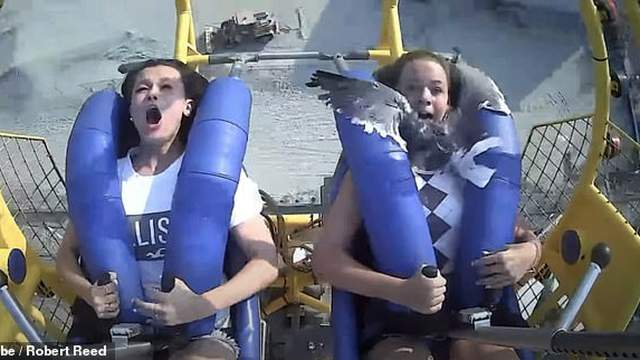 Shocking Video! Teen Smacked in Face by Bird While on Amusement Park Ride

A New Jersey teen probably feels that her recent birthday celebration was for the birds!

It was a shocking double smash! Once when a wayward bird struck a teen on an Amusement Park ride in Wildwood, NJ, and then it became another “hit” when the video of the weird incident went viral.

Certainly, when you go on an amusement park ride that flings you into the air like a ball from a giant slingshot, you expect some thrills and chills and maybe more than a little screaming. But this experience wasn’t what a certain thrill-seeker expected when she boarded the Sling Shot ride in New Jersey recently.

13-year-old Kiley Holman was celebrating her best friend’s birthday at Morey’s Piers & Beachfront Water Park in Wildwood. They climbed aboard the Sling Shot ride – which reaches a max speed of 75 MPH – when Holman got smacked in the face and neck with a seagull. In the video of the incident that went viral and even wound up on The Tonight Show With Jimmy Fallon, her gal pal seemed oblivious to the avian accident, though Holman had to physically remove the bird from her face and neck before tossing it back in the air. Both BFFs were screaming the entire time – though for entirely different reasons.

“I knew there was no going back, and it was just going to hit me,” Holman told Fox News. “I didn’t know what to do, so I wait for it to spin over. I just grabbed it and threw it off me quick.”

In the video, Holman can be heard screaming, “a bird flew on my face,” while Reed had no idea what was happening beside her.

“When I got shot up, then I saw it. It was going the opposite way, and then it came back and hit me right in the face,” Holman told Action News. “It felt really light, and it only left like the tiniest scratch.”

Luckily, the seagull quickly flew out of Holman’s face, and the girls enjoyed the rest of the ride. The incident even went unnoticed to Reed’s mother waiting for the girls below. She thought the feathers falling down were ticket stubs, she told the local ABC Action News.

Holman is an animal lover and didn’t mind the seagull’s intrusion. Ironically, she said she’s always wanted to catch and hold a seagull.

“I saw it on the internet, people trying to catch them and, I don’t know, I just thought it would be cool,” Holman said.

Neither the winged creature – who left a few feathers behind as mementos – nor the terrified teen was seriously injured, though Holman has sworn off the Sling Shot for life.

1 thought on “Shocking Video! Teen Smacked in Face by Bird While on Amusement Park Ride”