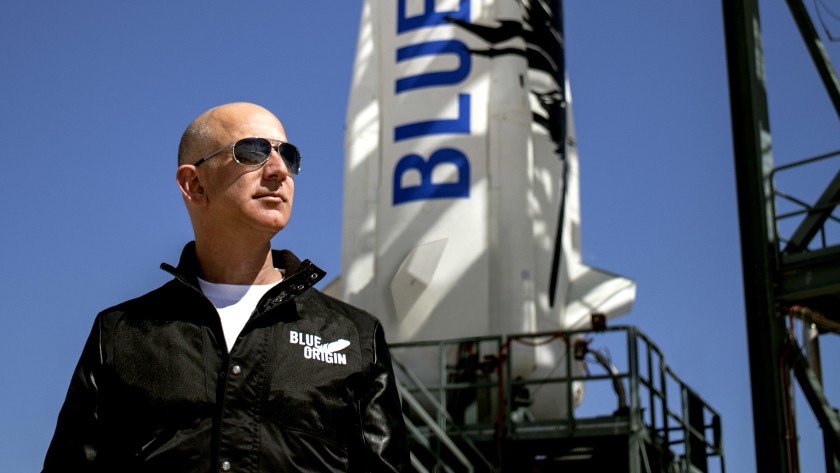 Millionaire and Amazon founder Jeff Bezos took a flight into outer space on July 20th and safely landed back on Earth in about ten minutes. His successful launch means the space tourism industry is going to ramp up, and we all know what that means: Rich people are going to pay for private flights that spew more toxins into the environment while championing policies that fight pollution.

Yeah, not much about this makes sense. But at least Bezos thanked all the workers at Amazon, as well as the customers, for their efforts and purchases that made his flight possible. Because that’s why we buy cheap products with guaranteed two-day delivery. Actually, we probably should rethink the end result of all those purchases that arrive with poorly translated instruction manuals (“This cover make your couch improved appearance every time. Try today and you like!”). But that’s another commentary.

For today, the takeaway is that Bezos’ rocket company, Blue Origin, plans to launch well-heeled tourists to the upper reaches of Earth’s atmosphere on a regular basis. So, now rich people have yet another way to waste their money and blame the results on us. As if mega yachts and overpriced designer clothing that changes each season weren’t enough.

Bezos said that his trip would help him see Earth’s fragility for himself. Astronauts often experience a sense of awe and deeper realization of how tiny the human race and its only habitable planet are after seeing the Earth from space. Bezos’ self-professed desire to make this experience more accessible and affordable to the average Joe seems admirable at face value, but the elitism and environmental cost are unavoidable. Plus, ticket sales money is going straight to his bank account, which is already pretty full since he is the richest man in the world.

Blue Origin has not announced its ticket prices yet, but competing space tourism company Virgin Galactic has already sold at least 600 tickets to its future flights. Tickets went for between $200,000 and $250,000 each. The company warned that future tickets will cost more. Most likely because quality assurance testing and tweaking of the prototype takes time and costs money. Not everyone can get in on the ground floor bargain price of a trip 62 miles above the surface of the earth.

No matter how much tickets cost, each short trip to the edge of outer space will spew pollutants into the environmental. Most people, regardless of income level, agree that this is generally a negative result. According to Ideas.Ted.com, rockets can emit between 4 and 10 times more nitrogen oxides than the largest thermal power plant in the UK over the same time period. Carbon dioxide emissions for the approximately four tourists on a space flight will be between 50 and 100 times more than the amount of emissions generated per passenger on a long airplane flight.

A primary difference is that the passengers on the airplane presumably flew somewhere to contribute to life on Earth – to work, visit a relative, tour a foreign country and contribute to its economy and enrich their own appreciation for their fellow citizens of Earth. But space tourism is basically a joy ride for the wealthy, a short but fun trip to look at their planet sans gravity.