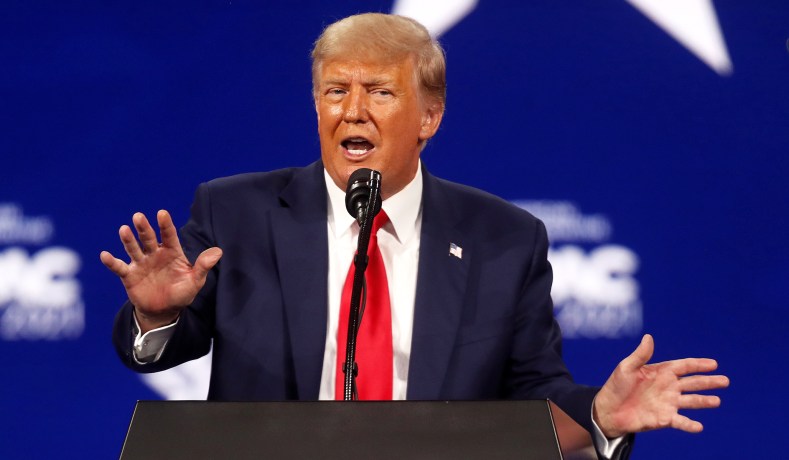 Even though Chuck Schumer’s call for a vote on the sprawling “bipartisan” infrastructure bill was dead on arrival, negotiations continue. However, former President Donald Trump is railing against his party not to cave during those negotiations, and more importantly, to “push back” against the Dems attempt to shove a $3.5 Trillion spending spree down the throats of the American people through budget resolution.

A typical voracious Trump who has been back in full-on attack mode in recent weeks urged Congressional Republicans to make every effort to block Democrats’ $3.5 trillion budget resolution from passing the Senate after the $1.2 trillion bipartisan infrastructure plan failed an initial test vote.

“Republicans must take seriously the effort by Democrats to completely change America through the Reconciliation Process,” the 45th president said in a statement. “Democrats are now suggesting that budget reconciliation can be used to pass Mail-In Ballot legislation as well as trying to include Amnesty in their infrastructure package.

“The infrastructure package has little to do with infrastructure as we know it, bridges, roads, tunnels, etc., but is a dramatic expansion of Government that will cost much more than the $3.5 trillion being discussed,” Trump added. “Don’t let this happen!”

Democrats are hoping to pass the smaller infrastructure bill through the Senate before ramming through the larger budget resolution via reconciliation, which only requires 51 votes. With the Senate split 50-50 and Vice President Kamala Harris able to break tie votes, Democrats do not need any Republican support to pass the $3.5 trillion measure so long as everyone in their conference remains onside.

The bloated spending package would include funds for education, climate change, Medicare, and other social programs. Progressives and immigration activists are also hopeful that language laying out a pathway to citizenship for illegal immigrants will also find its way into the final bill.

Trump sounded the alarm about the prospect in his statement, saying, “If Amnesty is included in the infrastructure package, there will be a run on our Southern Border the likes of which we have never seen before. It will be a signal that says, ‘come to America now because you will soon be a citizen.’

“Providing Amnesty to illegal aliens, in the history of what already is considered the greatest Border catastrophe, will result in disaster beyond our gravest nightmares,” the former president continued. “No country can pay this price. Will lead to ruination!”

Trump also warned that Democrats could seek to add language to the spending bill that would expand mail-in voting, a major point of contention in last year’s presidential election.

“Any effort to dictate national Mail-In Voting will be a disaster for our Country and for conservatism,” he said. “There will never be a Republican elected to high office again. I urge every Republican to fight this and deny Democrats a quorum if that is what it takes to make sure that the Democrats can’t use reconciliation.”

Trump echoed Sen. Lindsey Graham (R-SC), who said Sunday that his GOP colleagues should follow the example of Texas Democratic lawmakers and skip town to ensure that the budget resolution cannot move forward.

“Republicans must push back for the sake of our Country and, far less importantly, the sake of the Republican Party!” Trump concluded.