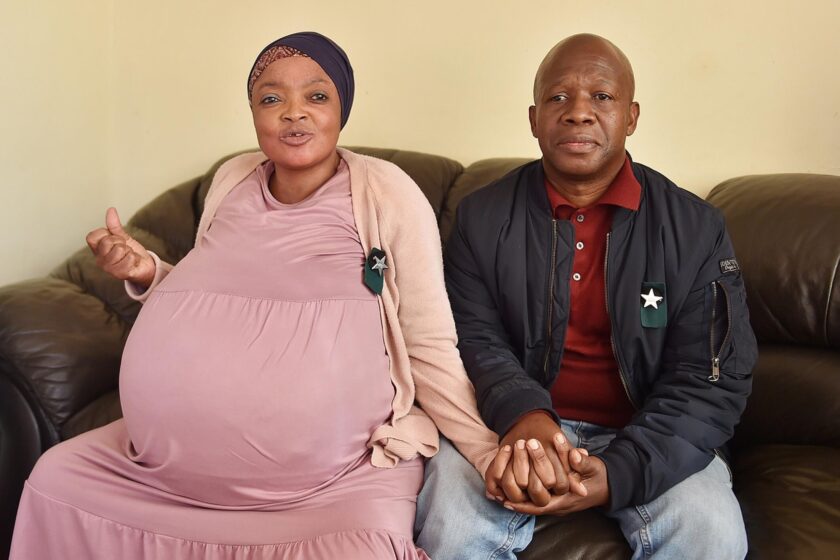 A South African woman has blown up the internet with postings about her giving birth to ten babies!

As “inconceivable” as it may seem, Gosiame Thamara Sithole has reportedly given birth to 10 babies in what would be a new world record.

Sithole, 37, is already a mom of six-year-old twins. She and her husband initially thought she was going to have eight kids, becoming a rare “Octomom” like Californian Nadya Suleman, according to news reports.

Sithole’s husband says they were astonished by decuplets after scans only showed eight in the womb – making her a “Decumom.”

“It’s seven boys and three girls. I am happy. I am emotional. I can’t talk much,” her husband Teboho Tsotetsi told Pretoria News after the birth. A family member, who did not want to be identified, told the press that Ms. Sithole had had ten babies – five via natural birth and five via cesarean section.

According to the BBC, the Guinness World Records is investigating Ms. Sithole’s case. If it can be confirmed to be true, it would be a record-breaker. A woman who had eight babies in the US in 2009 currently holds the official Guinness World Record for the most children delivered at a single birth to survive. Last month, 25-year-old Halima Cissé from Mali gave birth to nine babies, who are reportedly doing well at a clinic in Morocco.

Sithole, from Ekurhuleni, said that her pregnancy was natural and that she had not received fertility treatment, which has been linked to other multiple-baby births. If confirmed, Sithole’s 10-kid delivery would make it the first known birth of decuplets.

“Guinness World Records is aware of the news that Gosiame Thamara Sithole has given birth to decuplets, and we send our congratulations and best wishes to the family,” a spokesperson for the records listing told the New York Post. “At the current time, we are yet to verify this as a record as the wellbeing of both the mother and babies is of top priority. “Our records team, alongside a specialist consultant, are looking into this,” the spokesperson said.

Sithole had shown off her huge pregnant belly last month during a photoshoot with her husband when they still thought they were expecting octuplets. Even that had been a surprise, as the initial scans only showing only six babies, she previously told Pretoria News.

“When the doctor told me, I took time to believe it,” she said of the seemingly inaccurate news that she was expecting octuplets. “Even when I saw the scans, I didn’t believe it. But, as time went by, I realized it was indeed true. I battled to sleep at night, though,” she said. “God made a miracle, and my children stayed in the womb without any complications,” she said of her “hard” pregnancy.

As news of the decuplets spread, donations for the couple’s burgeoning family started pouring in so much so that father, Tsotetsi, has requested people stop donating money to his wife and their 10 new babies, whom he says he still hasn’t seen.

“I appreciate the financial support that we have been getting from members of the public, but I also would like to appeal to the public to stop making money deposits into our accounts until members of the community have seen the babies,” Tsotetsi told local newspaper Pretoria News, according to the Daily Mail.

Not only has Tsotetsi not yet seen his children, but he hasn’t seen his wife since she left home on June 7. While she has purportedly given birth to her hefty brood, the Mail reported that local authorities have been unable to trace Sithole to any public or private hospitals -casting some doubt on her incredible story.

Numerous family relatives have come forward to maintain that Sithole did indeed recently give birth to 10 children. However, as of the writing of this story, no doctors have been able to verify the fact, nor have any photos surfaced of the newborns. Pretoria News purportedly has all the details of the delivery but is holding publication due to “cultural and religious reasons.”

Tsotetsi, meanwhile, said he is excited to eventually meet his children, whenever that may be. As of June 11, he had accepted over $70,000 in public donations for them in Cape Town.

“I can’t wait to have them in my arms,” he previously told local media.