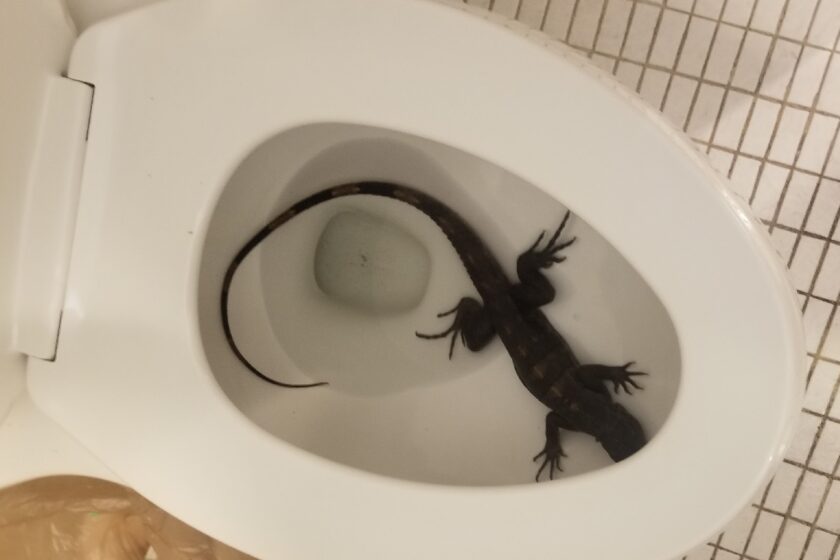 Meanwhile, in Florida, A man went to use his bathroom and found something odd in his toilet bowl, and it was not the Ty-D-Bowl Man! It was a rather large reptile!

Kurt Hilberth told CBS affiliate WFOR that he went to the bathroom to brush his teeth on July 24 when he spotted the disturbing sight out of the corner of his eye.

“It was so big that it was not submerged completely in the water,” Hilberth recalled to the outlet. “And it’s got that tail that whips back and forth.”

The Hollywood resident said he initially decided to take matters into his own hands by dressing in protective gear and attempting to pull the iguana from the toilet bowl by himself, WFOR reported.

However, every time Hilberth went to do so, the reptile kept swimming back down into the toilet, ultimately evading capture, according to the outlet.

It wasn’t until three days later that Hilberth realized he would need to call in experts after coming extremely close to capturing the reptile.

“I was able to grab him by his back legs and part of the tail,” he explained to WFOR. “I was pulling out; he was pulling in, the tail was going back and forth, water was flying everywhere, it was total chaos in the bathroom.”

The struggle ultimately resulted in Hilberth losing the iguana again and having the creature swim back into the toilet, WFOR reported.

“Unfortunately, I was left with a handful of tail,” Hilberth explained, adding that the tail that broke off in his hand was still moving when he frantically disposed of it outside.

It was then that Hilberth called in a team from Iguana Lifestyles to help with the capture, according to WFOR.

Trapper Harold Rondan told the outlet he had to position a stick in the toilet to encourage the iguana to crawl out. Luckily, his efforts were successful.

“I went, grabbed him, he turned around, got caught with everything, went in that toilet,” Rondan recalled to WFOR. “Put my hand, was able to get him and removed him immediately.”

According to Ron Magill with Zoo Miami, that particular breed of iguana is particularly dangerous to have inside a home.

“The spiny tail iguana does tend to be more aggressive, it’s quicker to bite and shouldn’t be handled,” Magill told WFOR, adding that the reptile’s claws, teeth, and spiny tail can carry disease.

“All iguanas carry a variety of bacteria,” Magill noted. “The things they’re most famous for are salmonella and botulism, but there are other bacterial infections you can get.”

Following the incident, Hilberth said experts determined the iguana likely entered his home through the sewage vent stack on the roof — an entrance he has since fixed by fastening metal mesh to the vent stack, according to WFOR.

He also said he feels lucky that nothing worse happened and that the reptile wasn’t found by accident during a middle-of-the-night bathroom run.

“Your bare behind is over the toilet, and there’s something in there,” he told WFOR. “Something with teeth! Something that can bite you down there is really a shivering kind of thought. You’re at a very vulnerable point.”

2 thoughts on “Florida Man Finds Large Iguana in His Toilet!”