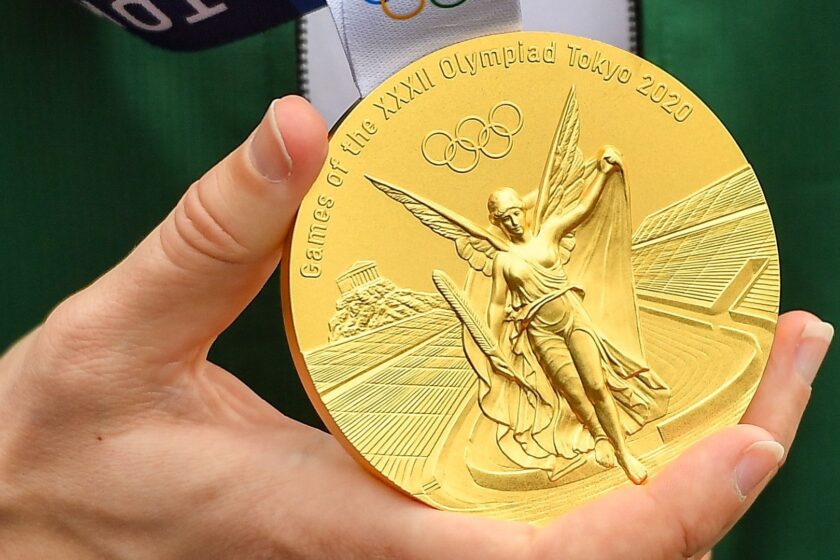 Japan Mayor is Sorry He Took a Bite Out of Olympian’s Gold Medal!

A Japanese Mayor is apologizing for taking a bite out of an Olympian’s gold medal.

I have heard of people needing more iron in their diets, but gold? Not so much. However, that did not dissuade a Japanese Mayor from taking a bit of an Olympian’s gold medal!

Nagoya mayor Takashi Kawamura had praised pitcher Miu Goto during the Aug. 4 visit, but his eyes were glued to her medal. He asked her to put it around his neck. Kawamura then pulled down his face mask and bit into it.

“I’m really sorry that I hurt the treasure of the gold medalist,” Kawamura told reporters Thursday.

The mayor said the medal was undamaged, though he offered to pay for the cost of a new one.

Goto, however, has accepted the International Olympic Committee’s offer of a replacement, according to Japanese media reports.

The medal bite has become a staple of Olympic photo-ops — but for the winners themselves, not others.

The scene broadcast on television prompted thousands of complaints to city hall. Some Olympians said they treat their medals as treasures and that it was outrageous for Kawamura to bite one.

“I saw the video and heard his teeth making a clicking noise,” Naohisa Takato, who won the gold medal in the 60-kilogram judo competition at the Tokyo Olympics, tweeted.

“I would cry if that happened to me,” Takato said in a tweet. “I handle my own gold medal so gently not to scratch it.”

Yuki Ota, a silver-medal winning fencer, said the mayor’s action was disrespectful to athletes and was a bad idea for COVID-19 measures.

Goto reportedly considered keeping the original but eventually accepted the IOC offer of a replacement.

Biting medals to test for gold was a common jokey gesture among victorious athletes in the pre-Covid days, but it’s frowned upon now, especially as the number of cases has risen rapidly in Japan since the Olympics got underway July 23.

Japanese authorities were so alarmed a state of emergency was declared in Tokyo ahead of the Games, which banned all fans from the stands. And recently, the Tokyo Metropolitan Government reported 5,042 new Covid cases, a new single-day record.

The Japanese public consistently opposed hosting the Games amid the pandemic, though sentiment has seemed to shift toward grudging acceptance as some see their worries that the Olympics would worsen the country’s Covid crisis give way to joy at its final medal count.

Japan won a record number of gold medals at this year’s games with 27 golds.

1 thought on “Japan Mayor is Sorry He Took a Bite Out of Olympian’s Gold Medal!”