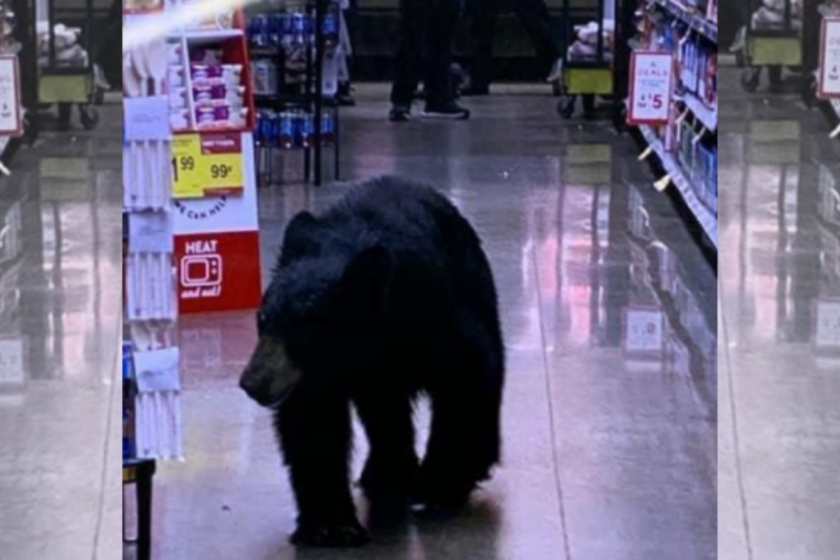 There may still not be an answer to the age-old question “does a bear shit in the woods,” but for one California black bear, at least we know where they shop!

A small bear was caught on camera casually strolling down the aisles of a Los Angeles grocery store. The bizarre scene happened at a Ralph’s grocery store in the Porter Ranch suburban neighborhood of Los Angeles.

Actress Tisha Campbell posted a video of the bear, saying she just happened to walk into her local Ralph’s and see it. Other shoppers are visible in the video, seeming completely unfazed as the bear strolls down an aisle.

There was no indication if the real-life relative of Winnie the Pooh was searching for honey or maybe some graham crackers? The bear was a baby, weighing only about 120 pounds, but even at that size, bears can be dangerous.

Witnesses told local TV station FOX 11 that the bear had wandered into the store and was eventually shooed out by employees.

The California Department of Fish and Wildlife located the cub behind a nearby Walmart, tranquilized it, and relocated it deep inside the Angeles National Forest, KCAL 9 reported.

Human encounters with bears are on the increase in California and elsewhere. As we reported on these pages earlier this year, Police in Thornton, NH, found that a black bear was responsible for a series of car break-ins in the area.

In July, an art teacher from Houston County got the shock of her life after coming face to face with a black bear that had managed to get itself trapped in her car.

California teen Hailey Morinico, recently made headlines and became a viral video sensation when she warded off a black bear that was attempting to jump her fence and attack her dogs.

In May of this year, a bear was shot and killed by authorities in the backyard of an Oregon homeowner. “We’re not surprised that bears are on the move. We’ve known that for a long time,” said Micah Holmes of the Oklahoma Department of Wildlife Conservation. “The only surprising thing was it was in someone’s backyard.”