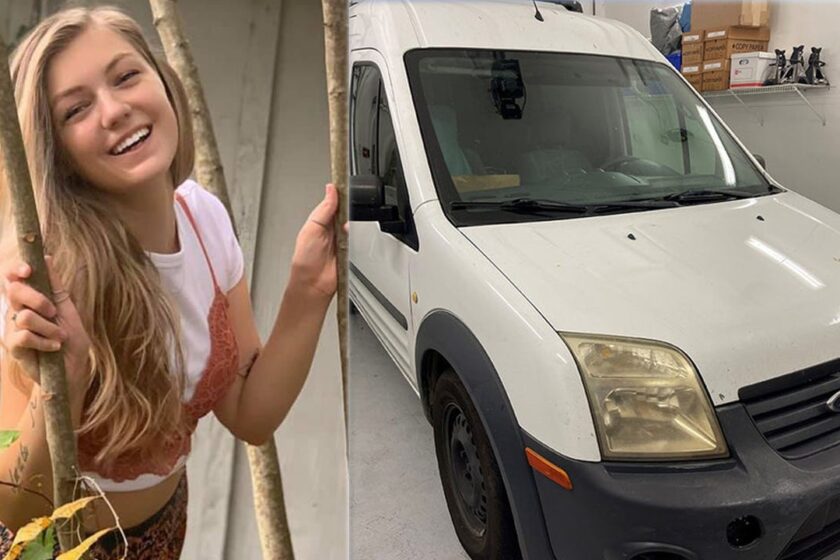 The story of the mysterious disappearance of Gabby Petito is now making national news.

The pretty 22-year-old woman from Long Island, NY, went missing during a cross-country road trip with her fiancé — Brian Laundrie. Laurie resides in Florida. He returned to Florida alone and has “lawyered up” and is not speaking to the news nor the authorities.

“Gabrielle Petito was traveling in a white, 2012 Ford Transit van with Florida license plate QFTG03 with a companion when she stopped communicating with friends and family,” police said in a release.

When Gabby was first reported missing, she was believed she was last known to be in Wyoming’s Grand Teton National Park. Authorities said the vehicle she and Laundrie had been traveling in, a white 2012 Ford Transit van with Florida plates, was found abandoned.

Since then, the case has garnered national attention, and Laundrie has been named a “person of interest” in her disappearance. Laundrie, 23, has not been charged with a crime, but police in his hometown of North Port, Florida, said they are now considering him a person of interest.

“As of now, Brian has not made himself available to be interviewed by investigators or has provided any helpful details,” police said. “We know Brian returned here to North Port on September 1 — ten days before her family reported her missing on September 11. We have no information that a crime occurred here in North Port.”

Laundrie has hired an attorney and returned to Florida – in Petito’s van – as a search is underway in Wyoming.

Petito’s family says he refused to tell them where he last saw her.

“Everyday, the search for Gabby continues the Schmidt and Petito family becomes more desperate,” Richard Stafford, the lawyer representing the Petito’s mother, Nicole Schmidt, said in a Wednesday statement. “They are frantically searching for answers and information in their daughter’s disappearance while Brian sits in the comfort of his home.”

As the search continues and the mystery deepens, Utah police have released bodycam footage of an “interaction” between Gabby and Petito that was the result of a 911 call for possible incidence of “domestic violence.”

The video shows officers from the Moab City Police Department talking to a visibly distraught Petito – and Laundrie – after they pulled their white Ford van over.

Police separated the pair before they each described the incident that prompted the 911 call.

A witness had called 911 around 4:30 p.m. on August 12 over “possible domestic violence” near Moonflower Community Cooperative in Moab and said he saw Petito and Laundrie arguing over a phone.

“The driver of the van, a male, had some sort of argument with the female, Gabby,” a responding officer wrote in the report, citing conversations he had with Petito, Laundrie, and the witness.

“The male tried to create distance by telling Gabby to go take a walk to calm down. She didn’t want to be separated from the male and began slapping him,” the report said. “He grabbed her face and pushed her back as she pressed upon him and the van, he tried to lock her out and succeeded except for his driver’s door, she opened that and forced her way over him and into the vehicle before it drove off.”

A responding officer initially wrote that he believes “it was reported the male had been observed to have assaulted the female,” but later wrote that “no one reported that the male struck the female.”

An officer eventually pulled the van over and said that when he approached, Petito was “crying uncontrollably” in the passenger seat.

One of the responding officers said the incident can be “more accurately categorized as a mental/emotional health ‘break’ than a domestic assault,” and that “no significant injuries” were reported.

Apparently, Laundrie stayed in a hotel that night, while Petito stayed with the van, according to the report.

In another recent development in the bizarre case, a TikToker claims she gave a ride to Laundrie around the time Gabby Petito was last seen.

Miranda Baker said she and her boyfriend gave Laundrie a ride at Grand Teton National Park on August 29, four days after Petito called her family to say she was in the park — and four days after her last Instagram photo before the disappearance.

In a series of four videos that have only just now surfaced, Baker claims to have picked up a hitchhiker she identified as Laundrie at about 5:45 p.m. on the way to Jackson Hole, which she referred to as “Jackson.”

Later, at about 6:09 p.m., when she mentioned “Jackson Hole,” he asked to get out, she said of her supposed interaction.

“Once I said Jackson Hole he became agitated,” she said in one of the videos. “He seemed like he needed to get out, he was kind of antsy. And that’s when things got weird.”

She claims they let the hitchhiker out near Jackson Dam, and he crossed the street to a crowded lot to continue to hitchhike. The TikTok user said she has spoken with the FBI and other law enforcement officials about the alleged encounter, but the FBI didn’t confirm they had spoken to the woman.

Meanwhile, as of the writing of this piece, a team of elite National Park Service rangers are searching for Gabby Petito in Grand Teton in Wyoming, and another squad may be combing a remote part of nearby Yellowstone.

The searches in Wyoming are underway at the same time police and FBI officers in Florida are searching a wildlife preserve for Petito’s boyfriend, Brian Laundrie, who has “gone missing” in an attempt to elude authorities. Laundrie’s parents say they last saw him Tuesday.

This is a developing story.