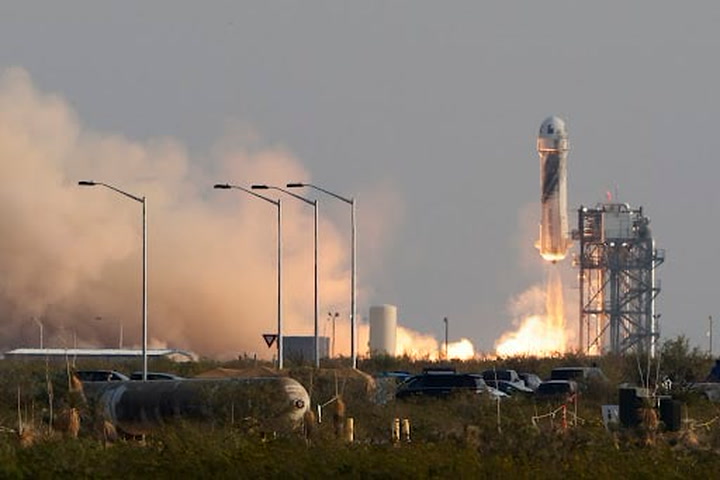 It looks like William Shatner, the legendary “Captain Kirk,” is about to boldly go where only a few men (and some women) have gone before.

The Star Trek icon, aged 90, is about to be the oldest person to travel into space!

Shatner recently announced that he would take part in the next Blue Origin rocket launch from Amazon founder Jeff Bezos. Shatner, best known for playing Captain Kirk on “Star Trek,” will take his real-life voyage in October.

He’s set to break the record just recently set by pioneering aviator Wally Funk, who was 82 years old when she joined Bezos on the first Blue Origin launch – 60 years after being denied a chance to do so with NASA because she was a woman.

Before Funk, the record was held by John Glenn, who reached space at age 77, nearly four decades after becoming the first American to orbit the Earth.

Shatner won’t technically be an astronaut. The Federal Aviation Administration issued new guidelines right after Bezos’ first flight, changing the rules so only those who “demonstrate activities during flight that were essential to public safety or contributed to human space flight safety” get their official astronaut wings.

Shatner has previously expressed his interest to travel to space. Last year, he tweeted a photoshopped image of himself in a spacesuit to NASA asking if he could join the SpaceX Crew Dragon Demo-2 commercial spaceflight to the International Space Station.

Then in July, during a panel at San Diego Comic-Con panel, Shatner said: “There’s a possibility that I’m going to go up for a brief moment and come back down.” This was a reference to NASA’s Artemis program, which aims to transport people to the moon in 2024, Space.com reported.

The other three space travelers who will join Shatner have not been named.

Though he hasn’t confirmed the reports yet, sources close to Shatner told TMZ that the 15-minute October flight will be filmed for a documentary.

Shatner’s historic flight won’t be the first time that the fictional world of Star Trek and the real space program crossed paths. As an homage to the legendary TV show, the very first prototype Space Shuttle, rolled out on September 17, 1976,  was named “Enterprise.” In recognition of its fictional namesake, Star Trek creator Gene Roddenberry and most of the principal cast of the original series of Star Trek – with the notable exception of Shatner — were on hand at the dedication ceremony. However, it was used to test reentry test flights only, was not space worthy, and never went into space.

The Enterprise is now on permanent display at the Intrepid Sea, Air & Space Museum in New York City.

1 thought on “Star Trek Legend William Shatner Will Really Blast Off to Space!”