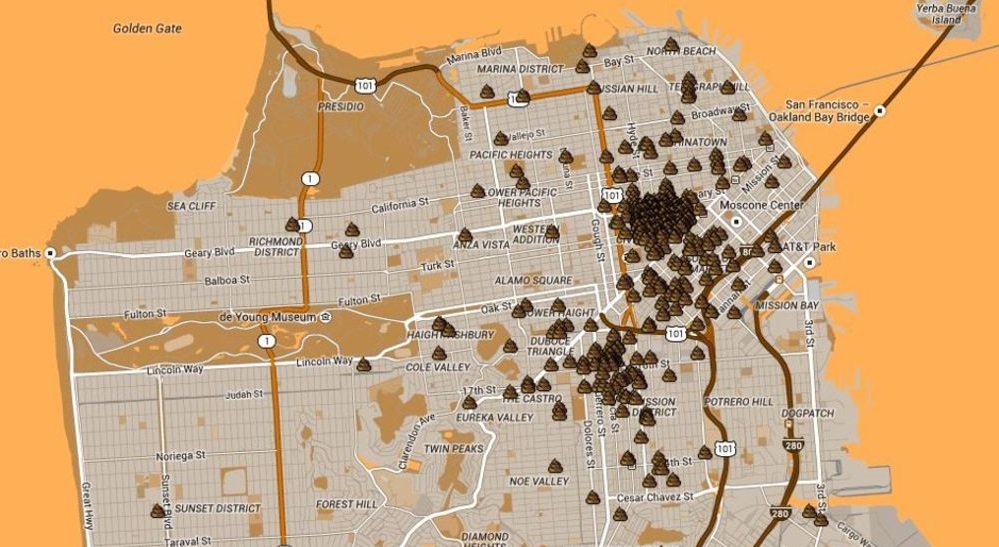 Crooner Tony Bennett may have left his heart in San Francisco, but a lot of local folks are leaving something a lot less romantic – poop. No, not talking about dog doo doo, but human excrement being left on the streets and byways of the California city.

Once known for its iconic cable cars, the trendy Fisherman’s Wharf, the Golden Gate Bridge and House Speaker Nancy Pelosi, the city by the sea has become famous – make that infamous – for the tons of human poop that litter the public fairways from Fort Point on the north to Vistacion Valley on the south – and from Mission Bay on the east to Golden Gate Park on the west coast. In other words, the entire city.

According to the official human excrement report and map – yes, they even have a map of poop sightings – in the past decade or so, there have been official reports of 118,000 dumps on the commons. Averaging somewhere between half pound and a full pound each, San Franciscans have dropped trou in public enough to have deposited between 118 and 236 TONS of fecal waste. And unofficially, officials believe that map records only a fraction of all the public piles.

The map above indicates the specific locations of those 118,000 dumps. You can not only find the map, but the specific addresses where each turd turned-up thanks to the folks at Open the Books. (click on the pinpointed map to get the list if you desire. But why you would, is beyond me.)

Of course, this does not consider the tens of thousands of druggie needles that are disposed of on the commons of San Francisco. That is a blight for another time.

But this is only the frosting on the cake. Okay, that may not be the best choice of words, but the point is that San Francisco has had a reputation for being a dirty city for decades. Not only has that been a frequent report for tourists, but my wife and I saw it first hand during a visit to the city more than 30 years ago. There was litter everywhere. It is the reason we never found a reason to go back. Actually, we avoided reasons.

San Francisco is a city with one of the highest homeless populations. It is reasonable to assume that the poop and liter problem are at least partially due to that fact. That has not helped encourage tourism. Most people have two reactions to the kind of homelessness you see all over San Francisco – pity and anxiety. As much as our compassionate side is sad to see disheveled people sleeping on benches or in the nooks and crannies of buildings, we also have a natural fear. These are, after all, desperate people.

I know the social welfare agencies promote photos of the homeless as a sad mother holding a couple sad looking kids in their fundraising material. In reality, if you travel through places where the homeless gather it is 90 percent scary looking men and an occasional woman. The odds of seeing that depicted woman and those cute kids is nearly the same as winning the California lottery.

One reason that San Francisco may not be able to deal with the poop, the liter and the homelessness is the lack of resources. Yes, that Golden City by the Bay is running short of the gold. San Francisco is broke – something that had been hidden by the folks in city hall for years. In 2014, the pension liability was officially reported as zero. One year later, after new accounting procedures were imposed, the pension liability rose to … ready?

If the taxpayers of San Francisco were to pay off the city debt in one payment, they would each have to cough up more than $16,000.

If there is any discernable reason that San Francisco is in the condition it is – suffering the modern debilities of America’s urban centers (and one seemingly unique to the city by the bay — the most obvious commonality is long term Democrat governance. The economic and social decline we see in San Francisco has spread to the entire state of California – much like the Democrat politics of Chicago is now bringing down the entire state of Illinois.

One can only wonder how our other great cities would compare is view through a poop map.