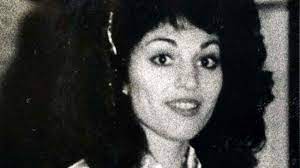 A registered sex offender in the state of Nebraska has just been charged with the murder of a pretty Iranian exchange student that occurred nearly 40 years ago!

According to local Omaha newspapers, Bud Leroy Christensen, now 67, was recently charged with first-degree murder in the death of Firozeh Dehghanpour, whose nude body was found by fishermen beneath a bridge north of Council Bluffs, Iowa, in August 1983. Dehghanpour was an exchange student studying at the nearby University of Nebraska at Omaha.

According to reports, an autopsy found Dehghanpour — who was last seen leaving the university’s campus a day before her body was found — died from slashes to her throat and multiple stab wounds to her body.

Investigators have said Dehghanpour was most likely killed elsewhere and that evidence showed that while she was found naked, she was not sexually assaulted. By all local accounts, detectives at the time believed she was targeted by someone she knew.

The probe into the unsolved slaying was reinvigorated by Dehghanpour’s friend, Steven Martin, who urged Pottawattamie County Sheriff’s Sgt. Jim Doty to take another look at evidence collected from the scene — including a bra and underwear — that could be retested using advanced DNA tests and analysis that were not available until recently.

Test results returned in March revealed a left-handed glove with apparent bloodstains on it that contained a male DNA profile, as well as Dehghanpour’s genetic material. Christensen was then identified as a suspect in the slaying after his DNA was entered in a national database called the Combined DNA Index System.

As a convicted sex offender, Christensen’s DNA profile had been in the Nebraska Sex Offender Registry due to three prior convictions, including two as recent as 2014. He was sentenced to 10 years in prison prior to being released in May 2018.

According to an affidavit, academic papers found near Dehghanpour’s body also had two of Christensen’s fingerprints on them.

“Giving the family answers is the most rewarding part of being able to solve the case,” Doty told the newspaper, saying he spoke to Dehghanpour’s brother in London for an hour after he got the news that Christensen had been charged. “He was shocked. He couldn’t quite process it.”

Christensen would have been 30 years old at the time of the slaying, the Omaha World-Herald reported. He was taken into custody in Omaha on April 30 and was ordered held on a $1 million cash-only bond ahead of his next scheduled court appearance.

Christensen waived his right to fight extradition to Iowa, the World-Herald reported.