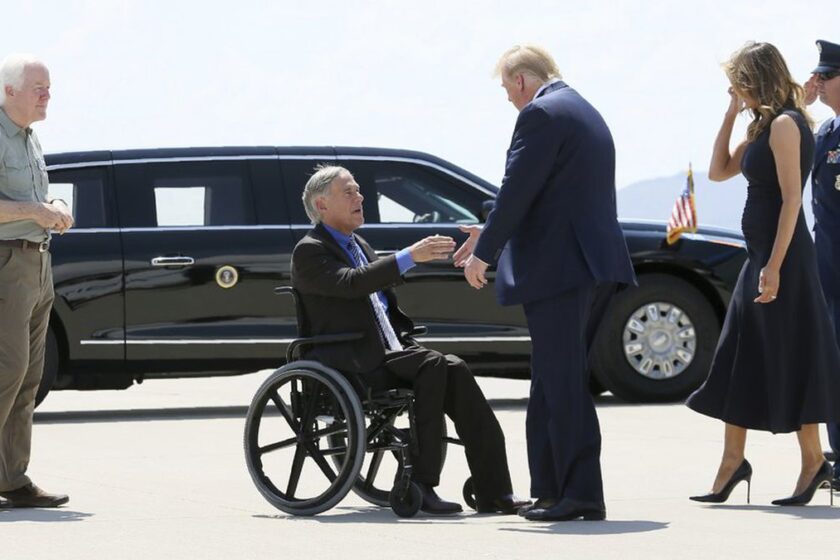 Trump Joins Texas Gov In a Visit to the Border

In a mix of policy and politics, Gov. Greg Abbott and President Donald Trump toured the southern border in the Rio Grande Valley.

During a briefing at the Texas Department of Public Safety headquarters in Weslaco, the governor briefed the former president about the state’s efforts to respond to the large increase of migrants crossing into Texas illegally. “We’re doing this because our fellow Texans, and our fellow Americans, they’re being threatened every single day,” Abbot said.

After the roundtable-style briefing, the pair later visited a portion of the unfinished border wall. During the roundtable, the president said the country is in a “sick state,” citing the state of the southern border under Joe Biden and the integrity of the 2020 elections. “But we have a sick country in many ways. It’s sick in elections, and it’s sick on the border,” said Trump. “If you don’t have good elections and if you don’t have a strong border, you don’t have a country.”

Trump touted his own handling of the southern border, pointing out the border now is more dangerous than it has ever been, especially compared with the historically low numbers while he was president. He also added, at this point, it is unlikely things will go back to the way they were under his administration.

Since entering the White House, Biden had done a number of things to peel back Trump’s border policies. This including halting the construction of the southern border wall and ending Trump’s “Remain in Mexico” program.

Before wrapping up their time together, Trump and Abbott both traveled to a segment of border wall where the 45th president briefly tore into Democrats for running disastrous elections. “Biden is destroying our country, and it all started with a fake election,” stated Trump.

Trump then took aim at the trafficking crisis on the southern border, saying it was almost a non-issue under his leadership. “We stopped them. And the drug dealers, we did a job like nobody thought was possible,” said Trump.

Republican Tarrant County Sheriff Bill Waybourn spoke during the briefing and warned about the rise in the dangerous drug of fentanyl being smuggled from Mexico to North Texas. “A year ago, fentanyl was barely on our radar. Well today, the intelligence that I have is that it has flooded our area. Even low-level dealers are now having large quantities of fentanyl.”

Since May of last year, there has been a 700 percent increase in illegal border crossings. That’s an increase of more than 400,000 people from the same time period a year earlier.