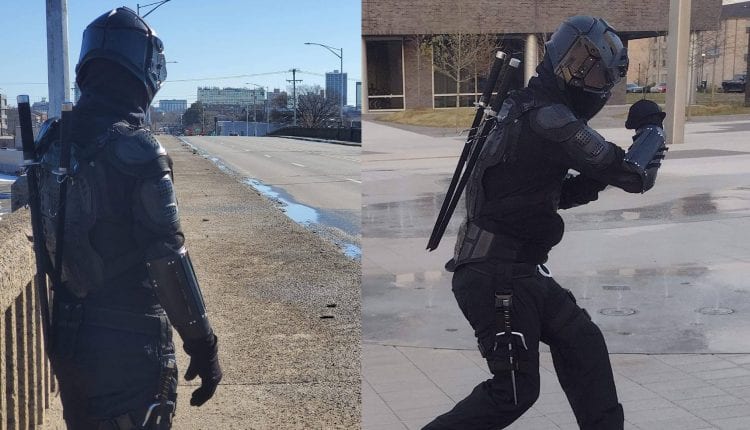 “Look, up in the sky; it’s a bird, it’s a plane… it’s….” No, it’s not Superman, nor is he flying over the streets of Metropolis, but a “real-life superhero” is on the ground in Arkansas on the trail of a serial killer!

He calls himself “ShadowVision,” and he recently told his followers on Facebook that he was in Little Rock this week “hunting the serial killer.”

“I know that the serial stabber is keeping an eye on my page here,” ShadowVision wrote on his Facebook page. “So this is a threat to you: when I find you, I will show you what I do to serial killers. I am hunting you right now.”

There have been four knife attacks, three of which were fatal, in Little Rock since August 2020, and investigators believe they are connected, according to the Arkansas Times. The victims of the stabbings appeared to be chosen at random. The attacks have been brutal.

Surviving victim Debra Walker, 43, was stabbed 15 times. Larry McChristian, 64, Jeff Welch, 62, and an unidentified man known only as “Old School” did not survive the attacks.

ShadowVision, whose real identity remains a mystery, is vowing to end that reign of terror.

“I am ShadowVision, a real-life superhero,” his Facebook bio states. “I protect the innocent at whatever cost. I would sacrifice my own life to safe [sic] an innocent life.”

The supposed vigilante claims to have “exterminated” two other serial killers years ago, according to the Arkansas Times, though that information has not been verified. He recently told Oxygen.com via email that one of the “exterminated” killers was in North Carolina while the other was in Arkansas, “back in the 1990s.”

“And I also love hunting high-ranking gang members,” he said. ShadowVision told Oxygen.com that he is originally from Belfast.

“The reason I showed up in Little Rock, Ark years ago is because the city needed help,” he said over email. “The other reason that I have also revealed myself to Arkansas and the world 11 months ago is that I got tired of turning on the TV, and all I hear is people losing hope. So I wanted to show them that they got someone fighting for them out here. Give the people hope again.”

Looking something like a cross between DC’s Batman and Marvel’s Deadpool, the vigilante typically wears a steel helmet, bulletproof chest, backplates, shoulder pads, fanged arm cuffs, handcuffs, two steel sais strapped to his thighs, and two katanas. He dresses in all black. When asked on his Facebook page, he said it takes him about twenty minutes to get all suited up.

ShadowVision told Oxygen.com that he feels he is “getting close” to catching the serial killer; In fact, he claims he already has his name.

“I am coming for you,” he said when asked if he’d like to deliver a message to the killer. “I also want a one-on-one fight with you.”

He’s been attracting more attention recently after a popular Tik Tok video was posted about him earlier this month.

“I can’t with this stupid city,” the TikTocker wrote, stating that first, her city has a serial killer and now a superhero to protect them. She included footage of the vigilante “patrolling” the streets.