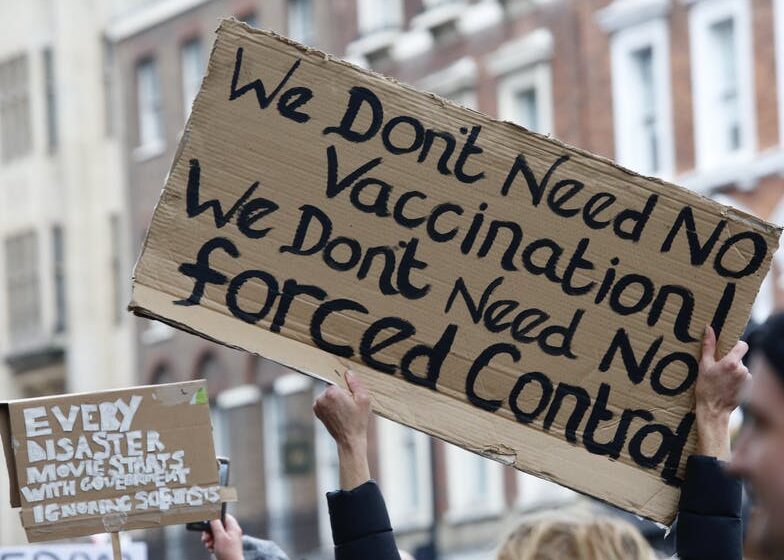 A man who was with a group gathered to protest vaccine mandates was stabbed to death for his views when the protest erupted into violence upon the arrival of Antifa counter-protesters.

The NY Post is reporting that the man was at a rally against mandatory vaccinations in Los Angeles recently after violent clashes broke out between demonstrators and Antifa counter-protesters, cops and local reports said.

Hundreds of people gathered on the south lawn of LA’s City Hall around 2 p.m. for a “choose freedom march” that organizers said was a protest against “medical tyranny, mandatory vaccinations, and vaccine passports,” KNBC reported.

About half an hour later, a fight broke out with counter-protest group “No Safe Space for Fascists” that organizers said responded to “violent anti-vaxxers.”

The LAPD said that one man was hospitalized with a stab wound. No arrests were made, but police said the investigation is ongoing.

A reporter on the scene for KPCC radio was also attacked by anti-mask protesters. He was seen walking out of the park near City Hall being screamed at and kicked, the LA Times reported.

“Unmask them! Unmask them all!” One man can be heard yelling in the fighting, while another man passes by covered in blood from the skirmish.

The crowd raised raucous cheers of “USA – USA” as the police moved in.

More videos showed taunting and skirmishes between the groups. Video from Los Angeles videographer Sean Carmichael appears to show one person being treated by responders.

The Los Angeles Police Department said it is “continuing to monitor the situation.”

The protest appeared to be in response to LA Public Schools Superintendent Megan Reilly’s recent announcement that all district employees would be required to be fully vaccinated against COVID-19 by Oct. 15.

Previously, weekly testing had been mandated for all students and staff regardless of vaccination status. The testing requirement will remain in effect, according to local affiliate ABC 7.

The LA City Council also voted earlier this month to have the city’s attorney draft an ordinance requiring vaccination proof for public indoor spaces, including restaurants, bars, gyms, theatres, and businesses, according to ABC 7.

6 thoughts on “BREAKING: Man Stabbed and Critically Wounded by Antifa at Vaccine Protest”