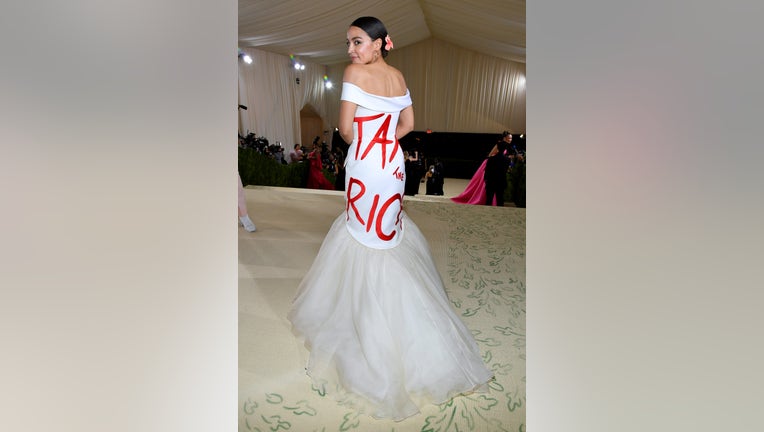 BREAKING: AOC Wears “Tax the Rich” Dress to Exclusive Gala at the Met!

In an example of the height of progressive-liberal hypocrisy, AOC wore a dress emblazoned with the words “Tax the Rich” to an exclusive NYC Gala!

Democratic Representative Alexandria Ocasio-Cortez (AOC), who is the face of the Democratic Socialists of America, showed up to the glitzy Met Gala wearing a political message seemingly aimed at her fellow partygoers.

AOC wore a white gown by Brother Vellies with “Tax the Rich” in red letters splashed across her back and accessorized with a matching slogan on her bag to the America-themed ball.

The 31-year-old rep, who is the darling of the far left, could have found a more receptive audience to her sartorial statement at a worker’s rally. The Met Gala is an exclusive event, which is a parade of millionaire pop stars, wealthy actors, trust fund society swans, and members of the gliteratti.

Still, AOC’s style collaborator Aurora James of Brother Vellies said the gala was the perfect venue for such a sartorial statement.

“We can never get too comfortable in our seats at the table once they’ve been given,” James, founder and creative director of Brother Vellies, told Vogue.

“We must always continue to push ourselves, push our colleagues, push the culture and push the country forward. Fashion is changing, America is changing. And as far as this theme goes, I think Alexandria and I are a great embodiment of the language fashion needs to consider adding to the general lexicon as we work towards a more sustainable, inclusive, and empowered future.”

While many see AOC attending the event and her message as hypocritical, in response to criticism days after the event, she posted on Instagram, “The medium is the message along with a photo of herself in the dress, “The time is now for childcare, healthcare, and climate action for all. … “And yes, BEFORE anybody starts wilding out — NYC elected officials are regularly invited to and attend the Met due to our responsibilities in overseeing our city’s cultural institutions that serve the public. I was one of several in attendance.”

Though it is true that the 35K entry fee was waived for Ocasio-Cortez, the excessive price of admission still irked and raised questions among her critics.

“One of the most disgusting things I’ve ever seen,” tweeted activist @hexthekyriarchy. “While constituents she failed are being evicted or wondering how they’re gonna eat tonight, @AOC out here living large at the #MetGala. Wearing a dress that says #TaxTheRich but will do nothing to make it a reality.”

1 thought on “BREAKING: AOC Wears “Tax the Rich” Dress to Exclusive Gala at the Met!”