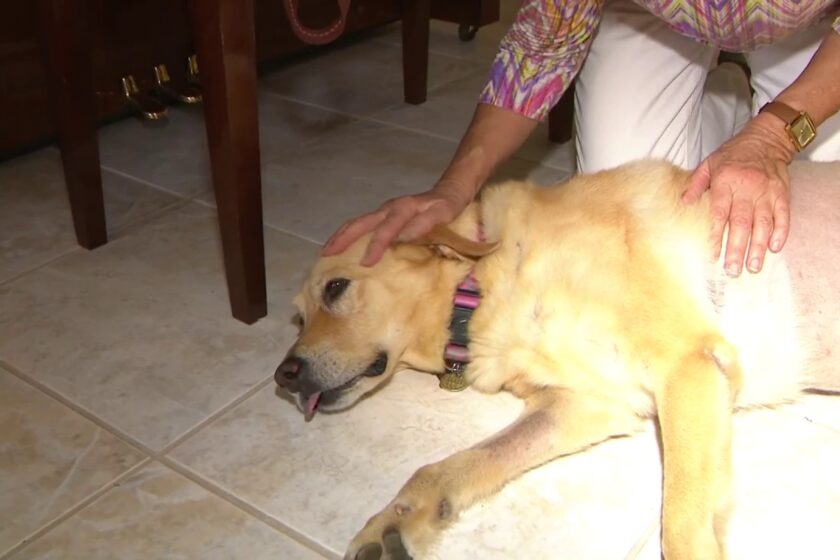 Elderly Florida Woman Fights Off Gator to Save Her Dog!

Meanwhile, in Florida… a woman valiantly fought off an alligator to save her beloved dog!

The 74-year-old woman, Suzan Marciano, says she was walking her golden retriever mix, Nalu, near a lake at Burt Aaronson Park west of Boca Raton on Aug. 24 when their night turned for the worst.

According to local news reports, Marciano took the dog off the leash, and it ran into the water when a 6-foot-long gator attacked.

“I wasn’t thinking,” she told the Palm Beach Post. “I did the only thing I could do. I came down on the alligator with all my weight.”

Marciano said that confronting the alligator to save her precious pooch was “a horrific” experience that she will never forget.

“I still see it so clearly,” Marciano said. “I could draw it, what the shape of that alligator under that water, it was so unmistakable.”

Marciano said she and her two dogs love the Burt Aaronson South County Regional Park. The afternoon of Aug. 24 was unexpected.

“I have been walking there for eight years and never, ever seen even a fish in that lake,” Marciano said.

Like most retrievers, Nalu loves the water. Marciano said she took Nalu’s leash off — just as she had done countless times before. It all happened quickly.

Marciano suffered a puncture wound on her palm that required six stitches. Nalu suffered puncture wounds under her belly and required surgery. Marciano said she knows they are both lucky to be alive, and she doesn’t regret her decision to jump in.

“If I hadn’t done what I did, I would have lost her, and that would have been even more horrific for me,” Marciano said, adding she would continue going to the park. She is just going to keep her dogs away from the lakes.

After the attack, Nalu was quieter and more tired than usual. The dog went on short walks around its neighborhood but often stopped.

While Marciano admits the park was a far more interesting place to walk the dog, it took a few weeks for them to return.

“I didn’t even want to see the park,” Marciano said. “I hardly went anywhere for two weeks afterward. I was in such a traumatic state. Every couple of hours, I was breaking into tears for no apparent reason. I still saw the shadow with two eyes looking up from out of the water. That image kept coming back to me.”

The gator has not been seen since. An incident report shows that a Florida Fish and Wildlife Commission officer and a park ranger checked the area and could not determine where the attack happened. The report states that neither of them observed any alligators in the lake.

1 thought on “Elderly Florida Woman Fights Off Gator to Save Her Dog!”