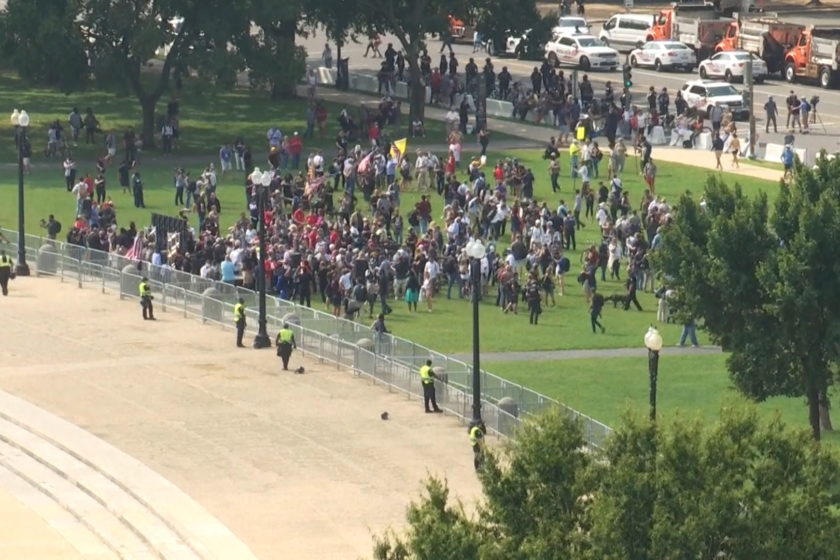 NOTICE: Hundreds Rally in Support of Those Arrested On January 6

Hundreds showed their support of the patriots who have been prosecuted for the January 6 protests of the stolen election.

Several hundred demonstrators gathered outside of the nation’s Capitol on Saturday, September 18, to support those jailed for taking part in the January 6 protest.

Speaking to the crowd, “Justice for J6” organizer Matt Braynard said it was about the many protesters who have not been charged with violence, haven’t been accused of assaulting a police officer or destroying property, and the “disparate treatment they’ve received.” He added, “this is all about equal treatment under the law.”

More than 600 people have been arrested in the months following the protest, and more than 50 have pleaded guilty to a variety of federal charges. Supporters showed frustration towards the treatment of the “political prisoners,” saying it’s inhumane and political prosecution.

With the House and Senate both out, no lawmakers were at the Capitol on the day of the rally. But preventative security measures were taken, including the reinstallation of temporary fencing around the Capitol complex.

The nearly 700 mostly peaceful protesters were heavily outnumbered by law enforcement as Capitol Police brought hundreds of officers into Washington, D.C., in order to prevent any possible violence. However, demonstrators emphasized keeping the peace and condemned the violence seen on January 6.

“The overall message is that we condemn violence. That’s not America. We need to make sure that we do a peaceful voice to be heard. Not a protest that is in violence. We condemn that. So, the resounding message that we’re trying to bring is that we can go out, have our voices be heard, and not have to do it violently,” said Jeff Zink, candidate for Congress in Arizona.

The small but passionate crowd dispersed as scheduled at about 1:15 p.m., with few incidents. The U.S. Capitol Police said they made four arrests near the demonstration.

Braynard at the rally called for a round of applause for police officers, saying, “We respect you. We know you have a tough job. We’re not your enemy.” He told protesters to “take your anger and channel it into something productive” and said the gathering was in support of those who he described as “caught up in the moment” on January 6. Those who committed violent acts, he said, “belong in prison.”

Capitol Police Chief Tom Manger said Friday that the primary concern was not violence at the rally itself but the potential for violent clashes between the demonstrators and counter-protesters.

5 thoughts on “NOTICE: Hundreds Rally in Support of Those Arrested On January 6”