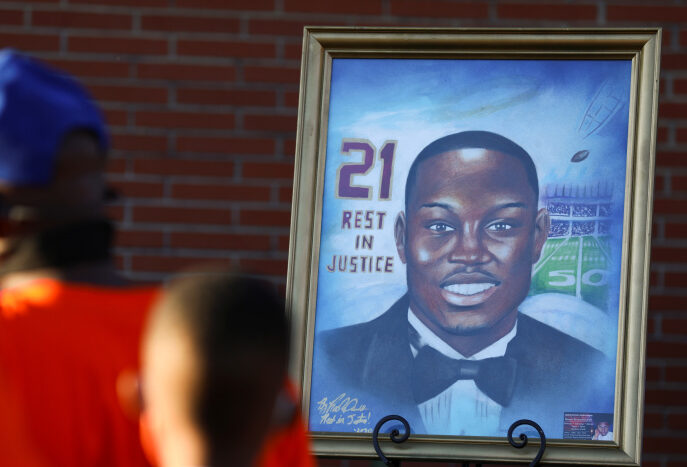 Former Brunswick Judicial Circuit District Attorney Jackie Johnson was accused of trying to delay the arrests of the white men charged with killing black jogger Ahmaud Arbery. According to reports, Johnson has turned herself in to the authorities.

Johnson, who was indicted last week for violating her oath of office and hindering a law enforcement officer following Arbery’s high-profile February 2020 slaying, has surrendered to the Glynn County Sheriff’s Office.

Johnson, 49, was later released on her own recognizance, local TV affiliate WTOC reported. She had been district attorney since 2010 but lost a re-election bid in November following calls for her ouster due to her handling of the Arbery case.

Johnson is accused of instructing two Glynn County police officers not to arrest Travis McMichael after prosecutors say he shot Arbery, 25, after chasing the unarmed man down in a pickup truck driven by his father, Greg McMichael, in the coastal town of Brunswick on Feb. 23, 2020.

Jackie, this is Greg,” McMichael said, according to a recording of the call presented to a grand jury. “Could you call me as soon as you possibly can? My son and I have been involved in a shooting, and I need some advice right away.”

Johnson did not call back Greg McMichael that day, court records show, but he previously worked as an investigator in Johnson’s office before retiring in 2019. Johnson then showed “favor and affection” toward her former employee by directing that his son not be arrested in the case.

The father and son have claimed they believed Arbery was a burglar who attacked Travis. They allegedly trailed Arbery for four minutes while a neighbor, William “Roddie” Bryan, followed behind while recording video that showed Travis shooting the black man at close range with a shotgun.

The McMichaels and Bryan were not arrested until more than two months later when a video of the shooting leaked online. The trio, who have been charged with murder, are set to go on trial this fall.

An attorney for Arbery’s mother, Lee Merritt, hailed the charges against Johnson, saying they will hopefully send “ripple effects” throughout the legal community, WTOC reported.

“Ahmaud Arbery’s murder was a tipping point in this nation for addressing the issue of not only violence and racism, but systemic racism,” Merritt told the station in a statement.

If convicted, Johnson could face between one and five years in prison for violating her oath of office and up to one year for hindering a law enforcement officer.

Johnson has previously insisted she did nothing wrong, saying she immediately recused herself from the case since Greg McMichael previously worked for her.

“I’m confident that when the truth finally comes out on that, people will understand our office did what it had to under the circumstances,” Johnson said after losing her re-election bid.

What do you think? Were the white men charged with murdering Ahmaud Arbery given preferential treatment by the Georgia DA’s office? Please reply using the comments below!