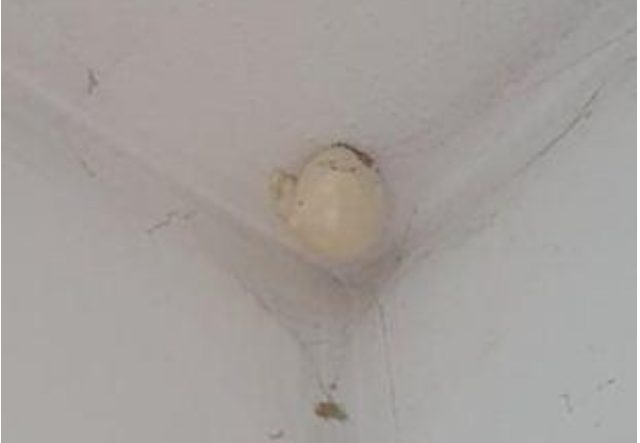 What Was the Bizarre “Dinosaur Egg” Found Clinging to the Roof of a UK Home?

A UK woman discovered what she thought was a “dinosaur egg” hanging from the ceiling of a friend’s bedroom.

The women uploaded a picture of what looked like an egg-shaped object to a popular Facebook group. The image baffled social media users and prompted some strange suggestions.

The object, which as she claimed did kind of look like a “dinosaur egg,” was uploaded to a popular Facebook page by a woman called Amy, who shared a snap of a strange egg-like object protruding from the roof of the house of a friend into the ceiling of their son’s room.

She wrote on the Family Lowdown Tips & Ideas page, “This [thing] is inside my friend’s son’s wardrobe. They don’t know if it’s always been there and they’ve never seen it or if it’s just appeared.

“Anyone any ideas what it is? And what they should do?”

The post sparked a huge reaction about what the strange object could be with many commenters baffled, local TV 7 News reports.

Most feared that the object could be an egg cluster of spiders or other nasty insects.

While others came up with any even more outlandish suggestion, one said, “If this was a billion years ago, I’d say we have a dinosaur egg on our hands.”

Another added, “My other half was in pest control, and he believes it’s a spiders’ egg nest. You can (vacuum) it up and then put a load of Raid (to kill spiders) in the hoover.

“If it is a spiders’ nest, then there will be thousands in there.”

Another commenter put forward, “I’d suggest a biohazard suit, insect spray, some form of fire, poke it and see what happens; at least you’re prepared.”

Another exclaimed — “Oh hell no. I’d not be touching that full stop. Call Ghostbusters immediately!”

After an investigation by Amy’s father-in-law, it was discovered that the egg-shaped substance was simply “expanding foam” from the roof of the house, despite fears it was a swarm of insects – or worse!